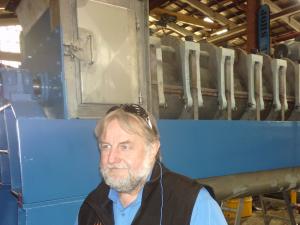 Tekam of Napier is the predominant engineering specialist in meat and fish processing heavy duty machinery.

New Zealand as an internationally ranked food process machinery design and development nation is in a position to reclaim this market he said, noting that machinery already ranked as New Zealand’s eighth most significant export.

Supplying the UK with heavy food processing technology was now much easier with the evaporation of much what is still known as the “tyranny of distance,” he said.

Machinery remains the United Kingdom’ s No 1. Import category he added, 12 percent of its total imports.

In regard to the UK market New Zealand was “in so many ways in an improved position” now than in the pre-EU era of Imperial and Commonwealth Preference.

Mr Evans has been responsible for some of New Zealand’s major meat processing systems and he has been a leading exponent of the refurbishment of many installations during the sector’s re-configuration in recent years.

“Meat processing machinery is upwardly and downwardly compatible and equipment can be re-purposed and transferred from one district to anothe, or even from one country to another --it is never scrapped.”

Mr Evans cautioned trade administrators to face up the “reality” as he described the situation of the sought-after markets in Asia and the Middle East, a market for meat processing systems that had become a “mirage.”

The Middle East North Africa market he said was tied into the export of live sheep.

“Well intentioned and lavishly taxpayer-funded model meat process installations have failed to dissolve the linkage between live shipments and specialist technology processing hardware of the type that is paid for,” said Mr Evans, adding, “we must now be realistic and accept this linkage, and the way in which it blocks our technology exports, however great the benefit of this technology and its cost-effectiveness to the region.”

Mr Evans, a participant in meat processing equipment trade missions to the Middle East, noted that the reality of the consequences of the live sheep export ban now had to be recognised, however “painfully.”

Similarly he urged trade administrators to accept other problems in exporting industrial equipment to the Asia region.

In Asia engineering food technology exports from New Zealand had been characterised by the need to supply test equipment which was promptly copied.

Mr Evans has previously drawn attention to another problem in these regions which is the little talked-about practice of prospective buyers imposing bidding and tender fees that turn out to be non-refundable.

Membership of the EU had led to Great Britain’s own meat processing equipment industry fading away as Britain became a service economy and continental European manufacturers took over.

Mr Evans has consistently warned of New Zealand “drifting” into becoming a service economy itself.

Instead the requirement was to grasp the new opportunities presented by Brexit, and indirectly by the United States which had promised substantial trade opportunities to a post-Brexit United Kingdom.

He cited a string of New Zealand agri engineering innovations including soil-heave freezer insulation, through to electric fences and halal-compatible process chains to reinforce his message.

There has been in industrial machinery terms an exclusive focus on emerging markets, a fixation which in the event has failed to emerge through eco-politics, and investment recovery – “getting paid,” as he put it.

“We are now faced by a re-emerging market, a recurring one, in the form of the UK,” he said.

He cited New Zealand’s reorganisation of its meat processing, notably in rendering, as an obvious attraction for densely populated countries as Great Britain.

“The industry’s transformation in recent times has meant that most people do not even know where the meat processing works are located, they are so unobtrusive.”