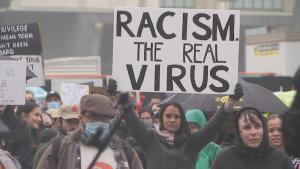 Mass marches switched from the extinction-rebellion climatic catastrophe ones to those vilifying the colonial era and those seen as benefiting from it, then and now.

The political-class rendition of this mild-mannered, fair-minded, and considerate nation as being in fact the repository of a bigoted, tyrannical majority, the kindest categorisation being racist, often delivered in the local dialect as “rashe-ist,” writes National Press Club president Peter Isaac.

This followed on the heels of the extinction-rebellion marches which saw city councils actively encouraging demonstrations seeking to portray a nation dedicated to hygiene, method and order as one of feckless polluting and contaminating.

This U-turn in causes was theatrically-defined by the mea culpa proclamation of the governing coalition’s cabinet who, in one instance, saw one of its members in front of an audience flagellating himself for having enjoyed what he saw as the advantages of being from a white middle class and thus pitifully unfair background.

This hair shirt exhibition was only one of many bizarre such displays as the political establishment turned itself inside out to signal its support of the freshly supercharged identity campaign in which for example senior police representatives were encouraged to attend in mufti solemn ceremonies of atonement.

Greens, by now suffering from acute publicity deprivation, seek to wrestle climate back on the agenda: notably by encouraging the mainstream media to make connections between Covid-19 and man made climate change.

Identity politics in washing man-made climate change out of the popular forum has given agribusiness an opportunity to regain a front foot at a time when its productivity is crucial.

The centrepiece of this agenda is to hobble with international-grade show boating political correctness the nation’s underpinning primary and extractive industries.

In the shorter term, few doubt that the media and political class take-up of identity causes and the vitriolic righteousness inherent in this accelerated mass guilt transfer diverted official attention from the myriad details involved in the administration of the nation’s Covid 19 quarantine management.

The viciousness with which this same class, sensing blood, now turned upon elements of public health administration and on the prime minister Jacinda Ardern was itself a lesson on how virtue in its eyes becomes transformed overnight into villainy.

The prime minister and her officials who had successfully implemented a campaign that thrust the nation into the top rank of the Covid-free must have felt a bit like the primary producers who delivering year after year a successful economy, find themselves denounced as threats to human survival.

To what extent did the United Nations’ preoccupation with the Greta Thunberg campaign divert it and, so fatally, its agency WHO from the true threat: the looming one in the form of Coronavirus?

To what extent did the aftermath of this United Nations-sponsored extinction campaign, the one which so hypnotised this same media political class, devalue the meaning of “emergency?”

There followed the regional climatic emergencies, the ones which otherwise responsible local governments, egged on by the equally gulled mainstream media, fell over themselves to endorse and support.

This particular round of institutional mass hysteria has been eclipsed by the real thing, a true emergency in the form of the pandemic.

Authority figures such as politicians once sought public gatherings to promote themselves. Now, however, in these new-era collective guilt gatherings, these same politicians still do this, but do so in reverse.

They heap guilt upon themselves, about their skin colour, the advantages bestowed upon them by the accident of birth….the word “privilege” recurs…..

They pepper this with selective statistics designed to underline this undeserved head start.

It is subtle self-praise of the type in which this class excels.

The impression is conveyed that the apologists in their penitence are, or have been, in a position to influence all these. That they have striven to alter the drift of mankind but, having been caught in the tide and that they have been unable to turn it back. That their lives certainly mattered, still matter. Will matter even more.

More such movements will wash up on these shores to be swiftly taken up by the political class whose representatives will turn themselves inside out in self-abasement with finely turned apologia which as we have seen is simply a reverse form of big noting.

Mass guilt transfer movements with their nurtured hysteria will continue to be imported here, and they will continue to arrive at times when nerves are under strain as they are now, by a pandemic and the economic consequences of it. 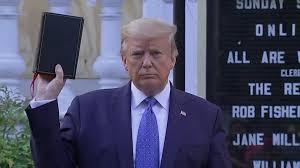 President Trump’s brandishing of a King James Bible in front of a church was a unifying signal which the mainstream media perversely chose to interpret as a divisive gesture, a stab at the soul of the union, even idolatry.

In fact the King James Bible ranks with the Declaration of Independence and the Constitution as an underpinning United States document.

It was carried by the original Mayflower pilgrims and became the founding moral handbook of the United States, writes National Press Club president and sometime White House visitor Peter Isaac.

The mainstream is determined to portray President Trump’s symbolic and silent display of the bible as representing the heart of darkness, as being un-American.

President Trump’s waving of the bible was an only lightly encoded message reaffirming this moral authority of the United States and its founding purpose of doing good.

Inflamed itself by its own contemporary interpretations of righteousness the media now sought to engineer the backfiring of the Trump gesture.

This is in spite of the mainstream being overwhelmingly controlled by those who claim adherence to two of the Abrahamist religions – Christianity and Judaism. These are also known as “the book” religions. (The third Abrahamist/book religion curiously enough is Islam.)

The bible incident served to underline how in the popular culture elite urban context contemporary techniques of seeking to be seen to display righteousness have modified and usually replaced those based on the bible.

Trump understood this and the way in which this stylised personal street level moral concoction borrowing only from orthodoxy in terms of fire and brimstone is seen by his own base as posing a long and short term threat to their own security, and to that of the nation as a whole.

This replacement new and ersatz street belief draws its power from a welter of modern and technology fuelled bespoke and free style cravings in the field of segmented virtue display imperatives.

The double symbolism of the Trump gesture was similarly missed. This was that for his bible-waving he had strolled across the lawn to St John’s church, demonstrably scorched by roving rioters.

Trump is no stranger to the religious backbone of the United States, an immersion emphasised by the teachings of his Gaelic-speaking mother Mary Macleod raised in Scotland’s Western Isles and which the mainstream throughout the English speaking sphere cannot bring itself to acknowledge.

While the fashionable urban politico-media class exults in the formula of targeted mass hysteria wallowing in its reflected virtue, president Trump knows that in the productive United States hinterland there remains a sense of revulsion centred on the short and long term effects of the orchestrated over-excitement, and the applied havoc in its wake.

Trump stepped into this beliefs vacuum with his bible moment.

This is the vacuum amplified as it is by the established church through its conviction that it must accommodate and ultimately absorb competing doctrines, ones with a persuasive following. It is the reason for example that it allowed things like the days and months of the year to be classified with the heathen names we all use today.

It is the reason now why the established church backs down from acknowledging the gratuitous mayhem detonated by these single-point ignition to multipoint and now globally viral civic violence eruptions.

It is a mayhem actually visited on working and god-fearing people, such as the proprietors of small businesses and those who cannot afford to move to the suburbs along with those others who are singularly unblessed by being poor.

The established church anxious to appease the well-placed agitators sidesteps the whole problem with incantations centred on mantras of revolving words such as peace, equality, justice, divisiveness…

It is the reason why petrified pastors fearful of losing the support of such influencers simply identified the bible incident as being “blasphemous.”

Meanwhile the arrival of the consignment of King James Bibles on the original Mayflower is one of history’s great coincidences.

The accelerating application of moveable type meant that the King James Version now quite suddenly became available and a consignment was rushed to the Mayflower only hours before it sailed from Plymouth.

The mainstream media in its quest for hip modernity has long dispensed with its once standard god-spot broadcasting segments and published homilies from clerics.

In the looking glass world of the media the bible has gone the way of the Whole Earth Catalogue.

And yet…and yet presidents are still sworn in on them.

President Trump was sworn in with two King James Versions

His own and President Lincoln’s.

President Trump knew as he sauntered to the by now boarded up St John’s church that in today’s era of orchestrated opinion journalism that his bible semaphoring would be reduced to showboating.

Or at best statements posing as questions such as, Was he holding it upside down, and whose bible was it anyway?

His signal though was tuned to a longer distance destination the one beyond the confected rage of the self-regarding mood makers of the coastal enclaves and beamed at the heartlands where once a week Americans still clutch the King James Version.

This hinterland tends also to be comprised of people who do not applaud, condone, concur and generally excuse the setting alight of parish churches such as St John’s.