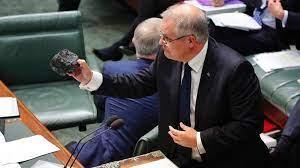 In 2017 Scott Morrison brandished a lump of coal in Australia’s Federal Parliament.

Nowadays the prime minister might prefer instead to wave a cup of baby’s blood in front of the assembled legislators.

In 2019 as children and adults at an Oceania conference wallowed up to their waists in pools of water Mr Morrison was on the receiving end of an admonition from New Zealand premier Jacinda Ardern to “explain himself” in regard to climate warming.

A few years before such a thinly veiled scolding would have had panjandrums in Wellington and in Canberra scurrying back and forth uttering sentences beginning with “What she really meant to say was……..”

This time there was no such fluttering. The comment was allowed to stand where it was, as it was, with no backsliding.

So what happened in the brief time when as Federal treasurer Scott Morrison waved his chunk of anthracite and that moment two years later when as prime minister he the senior trans Tasman partner received from his junior partner in the arrangement a condescending ticking-off?

In the intervening two years which saw Mr Morrison achieve his “miraculous” and “impossible” general election victory there occurred a societal shift, a tipping point traversed.

In this now recognisable turn of the ethical tide there emerged now a knowledge worker urban service sector craving to occupy the international ideological high mountain tops, the ones on which to display a passion for the betterment of the world as a whole.

In Australia the first to grasp the new puritanism was Malcolm Turnbull who as prime minister was responsible in 2016 for Australia’s retro-fitted French nuclear submarines.

As zany as the decision seemed at the time, and even more so later, Mr Turnbull saw that the nuclear-as-evil electoral talisman had crossed the Tasman and become firmly wedged in Australia’s own progressive psyche, the one dedicated to republicanism and other such stagey modernisms.

Scott Morrison similarly saw this mutation to what had hitherto been known as the environmental movement. But he realised that in its climate format and that however fashionable it was becoming the Australia middle class was still worried by the cost of it.

So filling the gap left by a captivated Labour Party he put price tags on the progressive zeal and won the impossible election.

The ideological waves from New Zealand breaking on Australia’s shores have now eroded this pocket-book approach.

In economic terms these progressive waves have become inelastic. Price does not matter. The elites want the product which New Zealand has taught them is globalist prestige and recognition. Progressivism had entered the economic zone of premium pricing. The greater the cost. The greater the appeal and perceived benefit.

This is why Mr Morrison now talks of his Labour opposition’s Big Government threat. He cannot be seen to denigrate and demean anything on the climate-social justice axis. The urban activist electorate will turn on him avenging the desecration of their recently acquired belief systems.

Back now to Tuvalu.

It’s symbolism as a political hinge was missed at the time because along with everyone else in Australia Mr Morrison failed to see that the New Zealand prime ministerial remarks were aimed at prestige-conferring globalist institutions as much as the locals.

In the event this unseen yet pivotal episode in Australian electoral progressivism was itself drowned out in an ensuing media-political comedy. Broadcaster Alan Jones said Mr Morrison should "shove a sock down her throat”, following Ms Ardern's critique.

The straight-taking broadcaster was described by Mr Morrison as being "very disappointing" and "way out of line".

Also missed at the time was the way in which Mr Morrison had allowed himself also to be slickly backed into the social justice corner, as well as the climate “crisis” one.

He was told that he had failed to do his “bit” for the population of these said to be submerging islands.

Mr Morrison by way of further explanation reminded everyone on the atoll that he had two daughters and in this paternal capacity was necessarily involved in sea levels in the Pacific.

It was a changing of the guard utterly unobserved at the time.

Out went the winner-take-all era of bluntly stated sports metaphor performance targets along with the ruggedly expressed emphasis on method and order and individuality.

Malcolm Turnbull, the first to discern the way in which New Zealand’s ideology centrepieces such as no-nuclear had penetrated Australian electoral politics, now also put his boot into Mr Jones describing the broadcaster as an "appalling misogynist."

The backwash continues to break on Australian shores. In the last few months News Corp in a carefully planned about-face suddenly converted and became a climate change believer and advocate. Swept away too was Alan Jones. 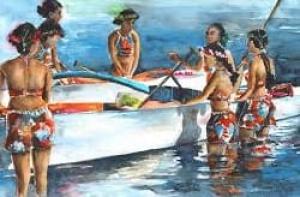 Christopher Luxon’s declaration in his leadership acceptance speech that he intends to return to the National Party fold precisely 413,000 absconding devotees rates as the most candid party political disclosure in memory.

This is because the majority of people in the politico-media sphere know exactly who these disaffected voters are.

They are middle class well-to-do females living in the nicer suburbs of the main urban centres.

They deserted the National Party because National itself became a casualty of the culture wars, overwhelmed even.

This entire disaffected segment of the National Party had hitherto been estimated at 300,000.

Mr Luxon’s disclosure of the much greater 413,000 number of absentees, truants, from his party’s ranks explains why his predecessor Judith Collins always seemed so tongue-tied on the matter of the culture wars.

This especially applied to the flagship climate cause and its costs which remain the underpinning worry for National’s traditional base of farmers.

If we estimate that there are approximately 100,000 family farm proprietors, ones that the National Party has always relied on for its bedrock vote, we can understand exactly why Mrs Collins was unable to challenge even the most extravagant of climate doctrines.

Any such direct challenge to the climate industry’s saintly intentions might win over one ACT-prone farmer. But it would harden the resolve of four suburban defectors to continue their self-imposed exile in Labour-Green land.

Given this 1:4 ratio against her it is small wonder that Mrs Collins had to bite her lip in the matter of the culture wars in general and the climate skirmishing in particular.

Mr Luxon in military terms has before him operationally the task of creating a pincer movement.

One pincer must convince the productive sector, the wealth-generating one, that he can at least contain the internationalist culture wars with minimum damage to the local economy.

Simultaneously he must persuade his missing 413,000 former adherents that their abject adhesion to these same doctrines will undercut the very prosperity that confers on them the privilege of their high mindedness and noble aspirations.

Broadcasters and daily newspaper practitioners are spellbound by the culture wars. They hold up the mirror in which the straying 413,000 can with a sense of regard see themselves fashionably and virtuously reflected.

Mr Luxon will have to communicate directly with his renegades. He can use things like Twitter and Facebook, and the rest. But this is already conquered territory overrun in the culture wars.

To win back the affections of the 413,000 absentees he must deal with them on their own terms which means using conventional media.

There are recent signs that this mirror may be cracking in his favour.

The first was when the Listener revealed the cost to the taxpayer of the government’s climate induced ban on oil and gas.

Without getting mired in oil depletion allowance minutiae the Listener piece explained the consequences of this political theatre.

It showed how in pulling out the rug from underneath the oil and gas sector the Labour government is now well on its way to achieving the 28 billion dollar economic loss forecast for the nation by the NZIER consultancy.

The article now appeared in the New Zealand Herald. It was handled gingerly by the Auckland daily. Up for barely a day on the paper’s internet version and securely behind a paywall. It was though a start.

Mr Luxon’s upwardly revised new figures on the alienated National Party voters is an astounding revelation. The numbers reveal that whatever he does do or does not do that he can no longer continue a policy of triangulating, taking bets each way on the climate front of the culture wars.

If he does he will generate an even worse ratio, this time of 4:0. This is because the farmer constituency will jump as a body into the ACT fold. He still wont have the missing 413,000 and he wont have any farmers either.

He has to find a formula by pass around this simple arithmetic.

Labour has dominated the culture war battlefield by grabbing the high ground on each and every engagement in the campaigns. It successfully frames its opponents as unfashionable, out of touch, coarse, unfeeling, unimaginative and selfish, insensitive and above all, insular

Mr Luxon a man of a philosophical turn of mind knows that the longest journey in the world begins with a single step.

Psephologists and others who seek meaning in voting patterns might point him in the direction of the Listener for this stepping off point of departure.

The weekly’s enduring historic catchment embraces each one of those earnest yet politically flighty quondam National Party followers so recently become daughters of Aquarius and now so very definably and publicly AWOL.