According to the latest list of registered orchards and packaging factories, the first commercial New Zealand avocados have officially entered the Chinese market and are now on sale at Tmall.

MPI to get tough on stink bug ships

Biosecurity officials are promising to take tough action against cargo vessels believed to be infested with brown marmorated stink bug during the upcoming risk season.

Geneva – The International Air Transport Association (IATA) released data for global air freight markets showing that demand, measured in freight tonne kilometers (FTKs), rose 2.1% in July 2018, compared to the same period the year before. This was the slowest pace of growth seen since May 2016 and well below the five-year average growth rate of 5.1%. 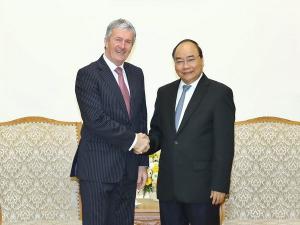 UK Investment Minister Graham Stuart is in New Zealand this week to promote UK-New Zealand investment and trade links as the UK prepares to forge its way in the world after it exits the EU.

Although it’s only a small part of the group, the good market for New Zealand apples contributed to the positive results of BayWa. The German multinational achieved a turnover of 8.3 billion euro, slightly more than in the same period last year.

Donald Trump and Brexit have given many people cause for concern about the future of the current world order. British economist Philippe Legrain spoke to Sam Sachdeva about tackling the public pessimism behind the rise of protectionism - and why there should be greater optimism about employing refugees. Sam Sachdeva reports for Newsroom.

Trade For All under question

Trade for All is a lie writes  Prof Jane Kelsey on The Daily Blog website.

The European Union’s top-ranking diplomat has talked up greater cooperation with New Zealand during a flying visit to the country, saying the EU is a reliable partner in an increasingly unstable environment.