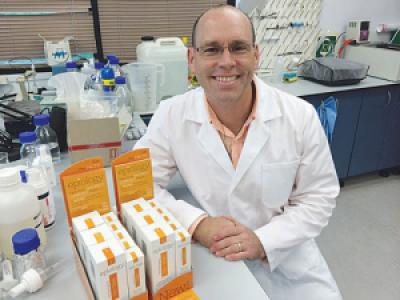 The supreme award acknowledged Quantec as the best overall entrant in the four awards categories open at this year’s event.

“We’ve experienced sustainable growth over the past nine years – a factor I imagine played a part in us receiving this award.

“We’re a small business with science at our heart, yet we’re experiencing commercial success here in New Zealand and in several key markets overseas.

“We’re a relatively young company: we started our natural dairy-based ingredient activities in 2009. It’s been a challenging road to get to this point and heartening to be recognised by the industry for our successes along the way,” says Claycomb.

Quantec manufactures a patented dairy ingredient -- IDP -- which is used by its customers to make products such as dietary health supplements and skincare. Its largest market for the ingredient is China.

Quantec also manufactures anti-acne products under the Epiology brand which contain IDP. Epiology is distributed through NZ pharmacies and Mexico is the company’s largest export market for the anti-acne skincare range.

The company set up a company in China in February this year, hiring staff and planning to expand.

Quantec is a past finalist in the NZ Innovator of the Year Awards and has won a Kudos Hamilton Science Award.