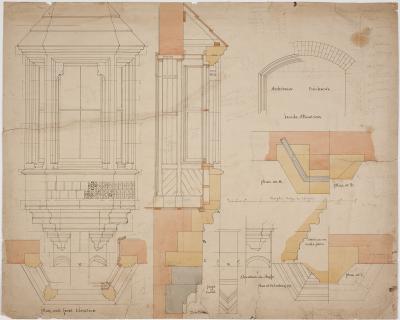 The University of Canterbury’s rare collection of thousands of architectural drawings has been selected by UNESCO as a significant and important piece of New Zealand memory that should be preserved for all time.

The Armson Collins Architectural Drawings Collection has been announced as one of the new inscriptions to the UNESCO Memory of the World New Zealand documentary heritage register today (26 November) at a ceremony in the National Library, Wellington.

The University of Canterbury’s Macmillan Brown Library holds one of the largest collections of architectural drawings in New Zealand. The collection includes original drawings by BW Mountfort, WB Armson, Sir Miles Warren, Don Donnithorne, Peter Beaven, Paul Pascoe and other noted Canterbury architects. A large number of these are pen-and-ink and watercolours, and are considered works of art in their own right.

With over 5000 architectural drawings, specifications and photographs, the Armson Collins Architectural Drawing Collection shows the development of architecture in Christchurch from the early 1870s into the 20th century, University of Canterbury archivist Erin Kimber says.

“The importance of the collection has been highlighted since the Canterbury earthquakes.

“No other collection in New Zealand provides such a complete representation of the built heritage that has suffered such a sudden and comprehensive loss. In some cases the drawings are the only remaining depictions of a building.”

“The collection is used by building and engineering professionals, home-owners, archaeologists, and history scholars, and continues to actively contribute to the Christchurch rebuild, making it a significant taonga for the region and its people,” Ms Kimber says.

“Inclusion on the register safeguards this collection for the future.”

Architect Samuel Hurst Seager believed that architecture: “takes rank beside the fine or beautiful arts of sculpture, painting, music and poetry, which minister to our higher being, appeal to our perception of what is beautiful, fine and noble; give play to our imaginative faculties and raise us on a wave of pure emotion to higher and nobler thought and aspirations.”

It is not hard to understand how architecture can also be thought of as art when delving into the Armson Collins Architectural Drawings Collection.

Founded in 1870, the firm of Armson and Collins was to nurture many generations of architects over the 123 years it existed. When the firm finally closed in 1993, the accumulated wealth of drawings and ephemera were donated to the University. The final senior partners, Maurice Hunt and Daryl Partridge, wanted to ensure that the designs would serve not only as an archive of the firm’s work, but would also go on to be used actively for teaching and research.

One of the most important features of the collection is that it shows the continuous development of architecture in Christchurch from the early 1870s. The Collection also demonstrates, through many excellent examples, the changes in styles and methods of architectural drawing techniques. Though the firm was known for their commercial work (for example The Press, Bank of New Zealand and Kempthorne Prosser buildings), the collection includes domestic jobs (Curator’s house, Te Koraha), ecclesiastical (St Mary’s Timaru), educational (Canterbury College, Boys High School, and Girls high School), and civic (Public Library).

The University particularly values the Collection because it contains original plans of the town site of Canterbury College (now known as the Arts Centre) from the 19th Century.

UNESCO Memory of the World