InSinkeRator to drive demand in the New Zealand market 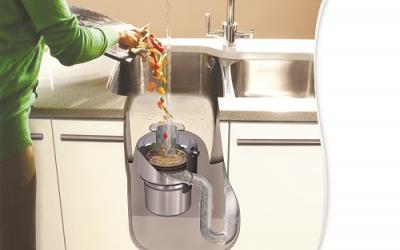 RACINE - Claiming it can compete globally from its manufacturing base in southeastern Wisconsin, where it invented the first garbage disposal 90 years ago, InSinkErator  on Thursday announced a $63 million raft of new investments that include new headquarters and research labs.

"We can be competitive here. We do it every day," said InSinkErator President Chad Severson. China, Britain, Australia and New Zealand are among the growth markets that InSinkErator expects to drive demand for made-in-Wisconsin disposals.

InSinkErator, owned by St. Louis-based Emerson Electric Co., will build a new $34 million headquarters and lab facility in Mount Pleasant, which is 5 miles from the flagship manufacturing plant, where officials unveiled the final design plans for the new prairie-style environmentally efficient building. Another $29 million is earmarked to expand the Racine manufacturing facility "and make room for future growth."

Company officials portrayed InSinkErator as a champion of made-in-America manufacturing, emphasizing that  90% of its suppliers are based in the United States, and all final assembly is done in American factories.

The company's basic food-waste pulverizing product is a staple in American homes, hidden under the kitchen sink. With new research and development labs, however, InSinkErator is broadening its aims into alternative energies, another global growth sector. Under a process it dubs Grind2Energy, InSinkErator will work with large-scale producers of leftovers such as stadiums or supermarkets and convert the leftovers into a slurry, which can be turned into fertilizers or biogas, Severson said.

The latest leg of expansion is part of a total $150 million in investments that Emerson is making in southeastern Wisconsin over the 2015-2019 timeframe. Those investments also include: $24.9 million to build a Kenosha facility, which opened in 2015, and $60 million in sustaining investment funding for various other needs.

InSinkErator employs 1,200 people in Racine, Kenosha and Sturtevant, making it a major employer in the region. InSinkErator is in the throes of restructuring its American operations but plans to leave its overall headcount in the region stable, officials said.

The new investments come as welcome news in Racine, where the unemployment rate is estimated at 5.3%, the second-highest of the state's 30 largest cities. Beloit has the highest, at 5.7%.

The new 85,000-square-foot headquarters, to be located in Mount Pleasant, also in Racine County, will be ready to open its doors next year near I-94, giving its executives access to the Chicago-Milwaukee corridor. It will house 175 engineers and professional staff.

"The I-94 corridor is going to be a very good jobs hub," said U.S. Rep. Paul Ryan, speaker of the House of Representatives, who joined the announcement in his home district. “Manufacturers like InSinkErator are the backbone of our economy.”

Ryan used the occasion to reiterate his support for a proposed overhaul of the U.S. tax code this year, meant to lower tax rates for American companies to become more competitive, and for the repeal and replacement of the Affordable Care Act, known as Obamacare.

“I truly believe there is no better place to do business in America than the Badger State," Ryan said.

Emerson has closed on the purchase of 11.5 acres at the southwest corner of Highway 20 and Industrial Drive in Mount Pleasant and has received local approvals to build on the site. Construction of the new headquarters and lab building, which has been designed to qualify for Leadership in Energy and Environmental Design certification, is scheduled to begin in June.

InSinkErator will receive financial incentives from the Racine County Board of Supervisors, which approved Emerson’s $4.65 million loan request, and the Village of Mount Pleasant Board of Trustees, which approved $600,000 in tax increment financing assistance.

Emerson expects to have its new InSinkErator headquarters open in July 2018 and reconfiguration of the Racine plant completed by fall 2019.