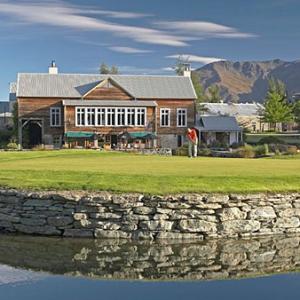 Two signature holes from the Coronet Nine and the Arrow Nine have been combined as the finishing holes, to maximise the atmosphere created by the amphitheatre surrounding the Millhouse Restaurant.

The tournament organisers have turned the current final hole of the Coronet Nine to the 17th hole, to be followed by the finishing 18th hole which is the current 9th hole on the Arrow Course.

“We will finish with a reachable par-5 over water as the 17th and a par-3 which is virtually surrounded by water as the 18th, which should add drama to the conclusion,” said Mr Spicer.

“The 18th hole is a relatively straight-forward par-3 but in a tournament like this, you never can tell. It all came down to the last few holes at The Hills last year, proving anything can happen at the close of a tournament.

“It has the potential to be an eagle-3 and birdie-2 finish or dependant on conditions and the situation, it can just as easily be a bogey-6 and double bogey-5. The nerves could tell.”

“We’re incredibly fortunate to have two great courses to showcase our National Open, and look forward to an exciting event,” he said.

“The configuration of the final two holes at Millbrook Resort will bring new drama to the event.

“The 18th hole at The Hills has been pivotal to the final showdown in previous years, and we’re confident that by creating two climatic holes we’ll add a real sense of theatre this year.”

The R&A and the USGA today announced the introduction of a new Local Rule that eliminates the penalty when a ball is accidentally moved on the putting green.

The Local Rule will be available for any committee in charge of a competition to use starting 1 January 2017. It will be adopted by The R&A and the USGA in all of their championships, qualifying competitions and international matches.

David Rickman, Executive Director - Governance at The R&A, said,'For the past several years, as part of The R&A and USGA's Rules Modernisation initiative, we have considered the penalty for a ball that is accidentally moved on the putting green. Both Rules Committees agreed that it needed to be changed and decided that in this particular case it was important to act now, through a Local Rule, rather than wait for the next overall set of revisions to the Rules of Golf.' 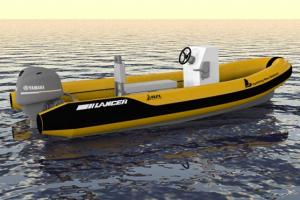 Yachting New Zealand has selected after an in depth design process the Lancer RK5000 “Ultimate Support Boat” as their new coach boat for their development programs.

From the outset of the project it was clear that modern sailing has put even greater demand on support vessels than is currently available. Lancer Industries Ltd and Yamaha Motor New Zealand who are long term suppliers to Yachting New Zealand, have teamed up to create a RIB package that will perform to these high standard requirements.

Lancer drew on the extensive knowledge of coaches, fleet managers and experts to create three key requirements; safe sea keeping, ease of operations and ergonomics. Consistent feedback was that many existing coach boats were recreational craft adapted for coaching and were simply a compromise.

The Lancer and Yamaha package is clearly the result of a customer led design. The unique hull has a long fine bow entry which leads to fixed lift tabs on the transom. This will really assist operation as the majority of work is done at low speeds and RPM, where the 60hp four stroke Yamaha has excellent torque.

A challenge was set by a user group for ‘Clean Decks’ but with a twist, everything below deck had to have good access, and no fixed fuel tank. This has led to a clever straddle seat that opens to a locker capable of storing two Yamaha 24 litre fuel tanks. There are many benefits, weight is low and well balanced, maintenance will have excellent access and all lines or cables commonly found on the decks of coach boats are hidden

The pedestal console used on the RK5000 is a well proven model used in the last two Olympic campaigns on Yamaha powered Lancer RIBS. More ergonomic consumer led design can be found in the placement of grab handles and stash bags so equipment is easy to reach and safety is increased.

The RK5000 is finished off with Lancer’s 3T designed hypalon tubes that allow for more contour and shape to create a fuller bow. Lancer’s inflatables tubes have a legendary status of longevity and reliability which reduces the true cost of ownership.

The first RK5000 is set to be launched for the ISAF Youth Worlds on 14-18 December with a more to follow. This is a very fitting debut for a RIB designed to excel in these conditions. 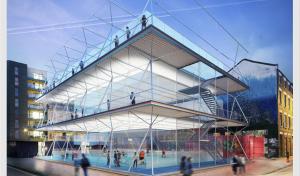 Designed specifically for use in urban areas where space is limited and safety is a concern, AL_A’s stackable Pitch/Pitch sports fields turn athletic endeavors into a community event. The clear sided structures provide views for passersby, and for spectators, covered walkways around the pitches provide up-close enjoyment of the action. The pitches can be configured for different sports, including football, basketball and hockey, and for different sized teams starting with three-a-side.

Integrated lighting and stairwells, as well as the lightweight carbon fiber material, mean the pitches can be constructed and deconstructed quickly and easily. The design team envisions Pitch/Pitch structures to be used for time-limited events or for much longer, depending on the space available. They can also be used for other activities as well.

Sport connects people and creates community and new materials and designs are helping to make it more accessible. A shipping container that contains everything needed to build a community center and sports field is now available. And for friends wanting to watch a game together, a new virtual reality platform creates a stadium everyone can gather in. What other community services could be delivered in similar modular style?