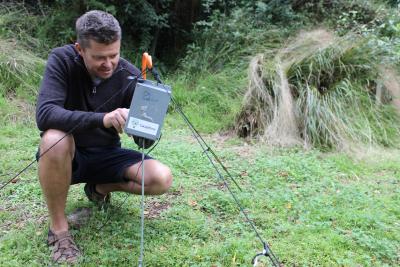 A researcher described as a hopelessly addicted inventor who is using artificial intelligence (AI) to find native bird predators such as rats, stoats and possums, will be an interesting speaker at AI Day in Auckland on March 28.

AI Day speaker Grant Ryan, from Christchurch, is trying to help make NZ predator free with his Cacophony Project. AI is a key part of the project for identifying predators from heat videos and learning audio lures to arrest the sharp decline in New Zealand’s native birds.“We have tested 10 prototype heat cameras and shown that they work to identify rats, stoats and possums using AI,” he says.“We are about to do more testing with full water proofing and robust design so we can get some cameras for further testing around New Zealand.“Heat video is the most sensitive for predator detection and it produces thousands of videos that used to have to be viewed manually. Now we have an AI classifier that automatically classifies 95 percent of them and this is improving all the time.“AI is going to change a huge number of things around the world and there is a lot of great work being done so AI Day is a great opportunity for leaders and innovators to come together and start engaging with AI now to secure a prosperous and thriving future for New Zealand.”Some of the top cutting-edge tech companies, academics and leading tech chief executives will unleash all the latest information on how AI is impacting New Zealanders’ lives at AI Day.It will be the biggest AI event ever to be held in New Zealand. The conference is being organised by NewZealand.AI and the AI Forum NZ, which is part of the NZTech Alliance, bringing together 15 tech communities, over 500 organisations and more than 100,000 employees to help create a more prosperous New Zealand underpinned by technology.Ryan says New Zealand is one of the worst countries in the world for having so many endangered or declining native species. Seventy percent of our endemic species are either already endangered or still in decline.“We developed an AI-powered heat camera specifically targeted at small nocturnal mammals. Initial results indicate that this picks up two or three 3 times as many predators than off-the-shelf cameras due to greater sensitivity and longer range.“Our project goal is to get the AI working in real time on the camera so that the predators can be eliminated when detected. We want New Zealand to be 100 percent predator free.“The first part of this will be using the AI to trigger a live capture trap but the next step is a device that fires a paint ball of poison so that one device can lure, identify and kill multiple predators.”Ryan has founded a number of companies including GlobalBrain.net (sold to NBCi), Real Contacts (sold to Intel), SLI Systems (listed NZX) and Eurekster, YikeBike and PurePods.