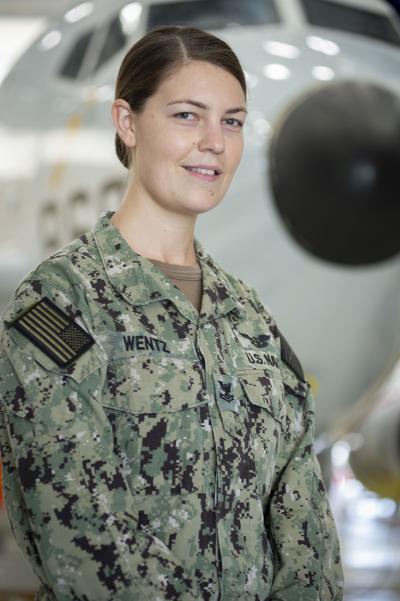 A Navy aviation maintenance administrationman is responsible for making sure all the inspections are up to date on the aircraft and as well as being responsible for publications.

“My favorite part of my job is that there is always something to learn,” said Wentz.

Wentz credits success in the Navy to many of the lessons learned in Whakatane.

“Growing up, I learned to form great relationships with the people you work with,” said Wentz.

The P-8A Poseidon is a multi-mission aircraft that is replacing the legacy P-3C Orion. Those who fly in the P-8A hunt for submarines and surface ships as well as conduct intelligence, surveillance and reconnaissance missions.

The P-8A operates with a smaller crew than the P-3C, and it also delivers an extended global reach, greater payload capacity, and higher operating altitude. It also has an open-systems architecture with significant growth potential.

According to Navy officials, there are more than 15 Navy patrol squadrons in the U.S. and eight of those squadrons belong to Wing Eleven, headquartered in Jacksonville, Florida. This means that those who serve here are part of the first “Super Wing” in Maritime Patrol and Reconnaissance history, ready to deploy and defend America and allies around the world.

Wing Eleven recently added the Navy’s newest squadron to its arsenal: Unmanned Patrol Squadron Nineteen (VP-19), flying the MQ-4C Triton Unmanned Aerial System (UAS). The P-8A and MQ-4C will serve as the future of the Maritime Patrol and Reconnaissance Force, according to Navy officials.

When asked about his plans following his assumption of command ceremony in June, Capt. Craig Mattingly, Commodore, Patrol and Reconnaissance Wing 11 said, “Our focus will be to take care of our most precious assets, the men and women of (Wing Eleven). We will sustain current readiness of our P-8A squadrons and reserve P-3C squadron while incorporating the MQ-4C Triton into the maritime patrol and reconnaissance force.”

Though there are many ways for a sailors to earn distinction in their command, community, and career, Wentz is most proud of advancing to the rank of pettey officer second class within three years from being an undesignated seaman.

“I’m very proud of overcoming all the obstacles I’ve encountered, I thought it would be much more difficult,” Wentz said.

As a member of one of the U.S. Navy’s most relied upon assets, Wentz and other sailors know they are part of a legacy that will last beyond their lifetimes, one that will provide a critical component of the Navy the nation needs.

“Serving the Navy means holding myself to higher standard than if I was a civilian,” said Wentz.