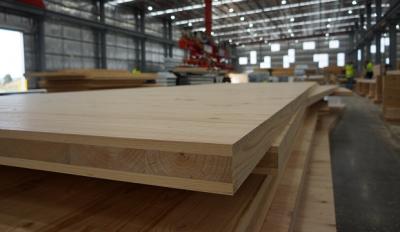 With a state-of-the-art new factory just outside Wodonga, XLam is taking on the Australian construction industry with a highly innovative product and cutting-edge manufacturing processes. By William Poole.

It’s easy to spot XLam’s new manufacturing facility long before you get anywhere near the actual building. As you come off the Hume Highway just west of Wodonga, the factory looms into view, occupying an impressive 12,000sqm in a landscape otherwise largely dominated by green fields. The opening of the factory has been something of a coup for the local community in Wodonga, and it might seem puzzling that XLam chose such a comparatively remote location, out on the border between Victoria and New South Wales, for such a significant investment. But there are several compelling reasons behind the decision.

Firstly, Wodonga sits at roughly the mid-point between XLam’s two key markets, Melbourne and Sydney (with Canberra closer still). In fact, the location will allow XLam to service 80% of the country in an overnight shipment, from all along the eastern seaboard right through to Adelaide. Moreover, the factory is a mere 150km from the Tumbarumba Mill in New South Wales, owned by its parent company Mayflower Enterprises, providing the primary resource: the timber used to make its product, cross-laminated timber (CLT).

Originally developed in Germany and Austria in the early 1990s, CLT is a structural building panel product, made by gluing wooden boards together in layers. Because each layer runs perpendicular to the last, CLT is very strong, with properties that can rival more traditional building materials such as steel and concrete. It is also relatively lightweight, making it easier and safer to work with on construction sites. In addition, CLT panels can be custom-made in precise sizes and shapes in the factory using advanced CNC machinery. Once they reach the construction site, the prefabicated panels just need to be assembled – almost like a piece of flat-pack Ikea furniture – saving time and significant costs.

While CLT has been commonly used in Europe and North America for decades now, it is only recently started to make an impact in the Southern Hemisphere. XLam was first founded in New Zealand in 2010 by brothers Robin and Ian Jack, establishing its first manufacturing plant in Nelson, South Island. The company grew rapidly, and was acquired by Mayflower in 2016. The factory has now been in operation since 5 March and currently employs around 20 staff, with the potential for that head count to rise to 40 when the plant gets up to full capacity.

“The investment in manufacturing Cross Laminated Timber is a game-changer for the Australian construction market,” says XLam’s CEO Gary Caulfield. “We are pleased to be a leader in the new technology and renewable materials innovation space providing efficient building solutions.”

From raw timber to bespoke components

XLam’s manufacturing process starts with the arrival of raw timber from the Tumbarumba Mill, cut into rough boards. These are loaded onto the start of the production line for initial inspection, where each board is inspected to check there are no knots or other defects in the wood. Rejected boards are sifted out for use elsewhere, while those that have passed the test are sorted to ensure the grain of each piece aligns.

At the next machine in the line, finger joints are cut into each end of the boards. Glue is applied to the finger joints, with sensors monitoring to ensure a sufficient amount has been used or if more is needed. The individual boards are then connected using a very powerful machine, which rams the finger joints together with immense force, creating an extremely strong bond. After curing of the glued joints, the boards are planed along all edges till they are the exact same width and depth.

The result at this point is therefore essentially one very long, continuous plank, which is then cut up again into shorter lengths. XLam can produce CLT panels measuring up to 16m long by 3.5m wide, so boards are cut to those lengths: 16m for boards to be used lengthwise, 3.5m for those running across the panel.

The cut lengths of board are laid out in line to form a layer, with each successive layer oriented perpendicular to the previous one. Panels may have three, five or seven layers, depending on customer requirements. The panel is bonded together with glue and then placed in a hydraulic press to cure and ensure a tight seal between the layers.

The raw timber has now been fully transformed into billets. From there the process moves on into the production of individual parts. Everything that XLam sends out from its factory is a bespoke component, precision-engineered to meet the specific demands of the customer. Each component will have its particular place within a construction project, designed to slot into place with minimal effort. Any inaccuracies would lead to delays on the building site, so it is vital that every component is produced to the highest levels of accuracy.

The completed billets are cut to size in a CNC five-axis processing centre built by Hundegger in Germany. This machine features a range of different tools able to perform various different milling cutting operations, with tolerances of as little as 1mm. Each workpiece is trimmed to size, with openings cut for doors, windows and other access points, channels for plumbing and wiring, and joints for connecting adjoining panels on the construction site. Specific shapes can also be produced from the panels – for example a solid staircase can be cut from a single billet.

Once cutting is complete, the components are ready to be shipped off to the construction site for assembly.

One thing that’s striking about the production process is the near-total absence of any manual handling of the materials. From the point where the boards of raw timber are loaded onto the production line, there is no contact with human hands till the finished components come out at the other end. This high level of automation of the entire manufacturing process has been achieved through significant investment in state-of-the-art manufacturing technology. According to Caulfield, this was a very deliberate move on the part of XLam in designing the new plant.

The team at XLam exude a palpable sense of purpose about what they’re trying to achieve with the Wodonga plant. There’s a strong emphasis on the environmentally friendly nature of the product and its production: the panels are made from sustainably managed timber without the burning of fossil fuels, while the plant’s proximity to Tumbarumba Mill helps to minimise the company’s carbon footprint. Considerable attention is also paid to issues such as management of waste or the non-toxicity of the glue used. In addition the company stresses a growing body of research highlighting the health benefits of living and working in built environments constructed from wood.

The sense of purpose within XLam’s business culture is fitting for a company that’s not lacking in ambition. The construction industry – long characterised by its use of materials and processes that have been established for decades or even centuries – is a market ripe for disruption. With its innovative product and its smart manufacturing techniques, XLam is having a significant impact on the sector.

Despite these lofty aspirations, XLam initially took a cautious approach during the early stages of its operation. However the company has now ramped up production and stands ready to provide projects for the Australian market. The XLam team is candid about the fact they have adopted a continious improvement approach to their product and what can be done with CLT. The company’s main markets include multiple residential buildings such as student accommodation or aged care facilities – buildings that generally have a repetitive floor plate and are relatively easy to make. The private residential market also forms part of XLam’s business, initially through owner-builders seeking to create their own high-end homes.

XLam already has a number of interesting projects in the works. One that stands out is the Hedberg performing arts venue in Hobart, for the University of Tasmania, which will include a recital hall, a studio theatre and various rehearsal and performance spaces. It is the latest in a list of more than 400 completed projects in New Zealand and across Australia, and that list is only set to grow now the new plant is operational. When it reaches full capacity, the Wodonga factory could produce around 60,000 cubic metres of CLT each year – enough to build a 10-storey apartment block every week.

Caulfield concludes: “XLam envisages it will be a dominant player in the Asia Pacific region, supplying building solutions to the region with an opportunity for further production expansion to cater to an ever-increasing need for mass timber products.”