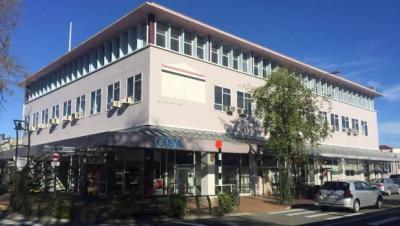 Developers are showing confidence in central Masterton, with the proposed development of its former post office building.  A group of investors under the name Chapel St Investments has bought the building, and plan to upgrade it and turn it into offices.

One of the investors, Masterton developer Trevor Pearce, said they aimed to strengthen the building, "totally modernise" the exterior and knock down an old earthquake-prone section on its west end.

The main building, on the corner of Queen St and Lincoln Rd, was built for New Zealand Post in 1961, while the rear part of the building is more than 100 years old.  The demolition of the older section would make room for 14 car parks off Lincoln Rd.

The idea of turning the building into an apartment-style hotel had been mooted, but Pearce believes they are more likely to convert the two upper floors into open-plan office spaces.  Masterton Mayor Lyn Patterson said she was delighted to see developers had confidence in the central area of town.

With the post office upgrade, other proposed developments and the council's own projects, she said she was optimistic about the CBD's future.  "We have to recognise that retail's changing and what type of businesses we have in our CBD may also change.  "It ties in very much with our CBD redevelopment over different stages," she said.

The building was formerly a hub of the town as the main post office, and then later as Paper Plus, which included postal facilities.  When Paper Plus moved one block south along Queen St, many observers recognised that the centre of pedestrian traffic moved with it.

Concepts have been drawn up to modernise the building's exterior with wood panelling and louvres.  "We've got some fundamental issues to deal with like the earthquake strengthening and there is quite a bit of lead-in time with that work to get the right engineering advice and all the rest of it," Pearce said.  "When we get the New Zealand Post building out of the way it will make that job easier," Pearce said.

The property deal went unconditional in December with the transfer scheduled for the end of April.  "You'll start to see some activity here probably July-ish," he said.

While some of the retail space on the ground floor is currently vacant, the OPSM optometrist and retail shop occupies one of the spaces.  The lease on this shop expires in September.

More in this category: « Provincial Growth Fund should proceed with urgency Six-year wait for gorge route »
back to top
Oct 23, 2018