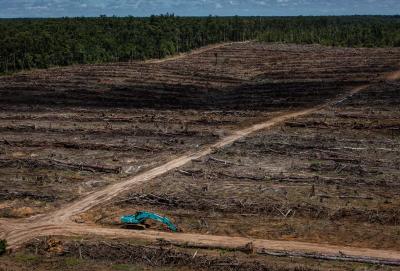 Fonterra is about to take another hit to its international reputation, this time over rainforest destruction and cow feed.

A Greenpeace investigation out today reveals the New Zealand dairy giant’s key supplier of palm kernel extract has links to a huge expanse of deforestation in Indonesia.

The practice of clearing tropical rainforest for palm plantations has been condemned for its effects on climate change and the habitat of endangered animals like the orangutan.

Fonterra imports PKE, a product made by the palm oil industry for supplementary feed. New Zealand is the world’s largest user, bringing in a quarter of the global supply.

After public outcry two years ago Fonterra agreed to adopt an industry standard to ensure its use of PKE wasn’t leading to deforestation.

Now embarrassingly its main supplier of PKE, Wilmar, has been linked with the mass destruction of rainforest in Papua, Indonesia.

“The international reputation of NZs dairy industry is seriously on the line here and so are the world’s last remaining rainforests.” says Gen Toop, Greenpeace’s sustainable agriculture spokesperson.

Photos taken by Greenpeace International on a recent flyover show an area of forest twice the size of Paris has been destroyed.

“Fonterra’s attempts to get rainforest destruction out of their supply chain have clearly failed. They need to get out of PKE altogether.”

The Greenpeace Investigation shows the concessions in Papua belong to a business called Gama. Documents reveal that it’s run by senior Wilmar executives and members of their family.

“Our investigation has exposed Wilmar’s dirty secret. For years, Wilmar and Gama have worked together, with Gama doing the dirty work so Wilmar’s hands appeared to stay clean.”

As well as being implicated in deforestation in Indonesia, PKE is also one of the main drivers of dairy intensification in New Zealand.

“PKE fuelled the expansion of industrial dairy farming here in NZ. We now have way too many cows polluting our rivers and warming our climate.” says Toop.

“We’ve got to ditch PKE, re-focus onto pasture based dairying and farm fewer cows. These are the first steps towards transforming NZs dairy industry to regenerative farming which is the direction we need to be going. ”