Fuxing fast trains to hurtle from Beijing to Shanghai 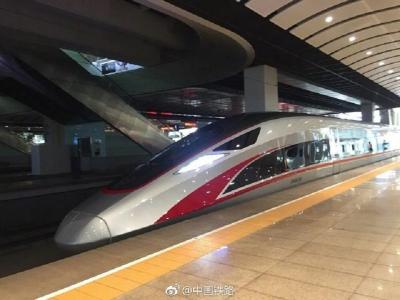 China is to start running the world’s fastest train service between Beijing and Shanghai, with trains eventually hurtling along the track at up to 400 kph, making them a viable alternative to flying the sector.

The Fuxing fast bullet trains will initially run at a slower speed of 350 kph on the route. Service will begin in just one month, on 21 September 2017, China Railway Corporation has confirmed.

Fuxing is not an adjective. It means rejuvenation, with national rejuvenation being a slogan promoted by Chinese President Xi Jinping.

The train has been put into service initially on two railway lines connecting major cities in the Beijing-Tianjin-Hebei area, China’s Xinhua news service reported. Fuxing high-speed trains will make 39 one-way trips between Beijing and Tianjin and six one-way trips between Beijing and Xingtai, Hebei each day. The trains will stop at 10 cities in the region.

The trains offer power outlets, USB ports and free WiFi, making them far more advanced than Australian trains, and not just in terms of speed.

The Fuxing high-speed trains ran in June for the first time on the Beijing-Shanghai line, China’s busiest route, used by more than 500,000 passengers daily.

Fuxing fast trains will knock an hour off the 1318km journey between Beijing and Shanghai. Hong Kong’s South China Morning Post, which examined the current train schedule, reported that the fastest bullet train running currently on the route takes four hours and 55 minutes and most bullet trains take around 5½ hours.