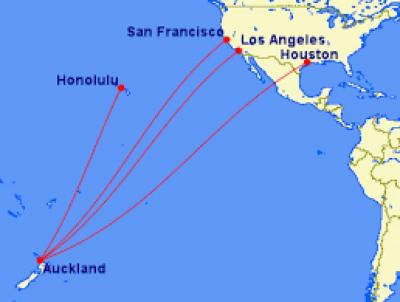 Air New Zealand will fly daily to Houston for most of next winter as demand for travel between New Zealand and Texas continues to soar. Air New Zealand currently operates five services per week to Houston year-round. From 25 March to 27 October 2018 it will increase to a mix of daily services and six services per week, a capacity increase of 16,000 seats on the route over this period. The airline will deploy its newly configured 787-9 Dreamliner aircraft on Auckland-Houston from December 2017, the first time the Dreamliner will regularly service one of Air New Zealand’s North American routes. Air New Zealand’s Chief Revenue Officer Cam Wallace says the airline has steadily grown its Houston operations since it commenced services there in 2015 and it’s fantastic to see strong demand from both ends of the route. “A strategic gateway into America’s south, Houston is unlocking huge demand for travel to New Zealand from across the South, Mid-west and Mid-Atlantic regions, with annual visitor arrivals up 21 percent from Texas and 25 percent from New York. “As a transit hub, Houston also offers Kiwi travellers better onward connections to popular East Coast destinations like New York, Boston and Miami.” The newly configurated 787 offers more premium seating for customers, with 27 Business Premier seats – up from 18 on the existing Air New Zealand Dreamliner, and 33 Premium Economy seats, up from 21. Air New Zealand also offers its popular Economy Skycouch™ alongside the Premium Economy and Business Premier options on services to Houston. Air New Zealand recently launched its global marketing campaign A Better Way to Fly in North America, using a CGI kiwi named Pete in a bid to convince more Americans and Canadians to travel with the airline to New Zealand and Australia.