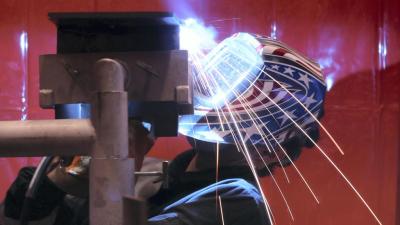 There are competitions for 51 vocational skills at WorldSkills Abu Dhabi 2017 this week. Can one man watch them all?

Entering the main halls at Abu Dhabi National Exhibition Centre, the task seems daunting. Not for nothing is this known as the world’s largest vocational skills competition.

It fills Adnec and then some. There are competitors as far as the eye can see, and then beyond that, even to the other side of Khaleej Al Arabi. If this is the skills Olympics, attendance is going to be a marathon rather than a sprint.

First up in the main exhibition halls is Industrial Mechanised Millwright, which is something to do with maintaining factory machinery.

We can watch the competitors at their work from the other side of barrier, but may not disturb or talk to them.

Bioa Song Chin from China is not in his enclosure, but Tatsuya Kawozoe from Japan is busy arranging sticky notes on his bench. Clearly there is more to come.

Next up is Welding. The welders live in darkened enclosures in which we peer, eyes protected, while looking for signs of life. Here’s Dylan Bloch from Australia, his face hidden by a welder’s mask, illuminated with the blue glow of his torch. The sparks are starting to fly in welding.

The contestants in Construction Metal Work also live in darkened enclosures, like nocturnal animals. Finland’s Juho Nissinen is carefully marking out his design with a metal ruler, as is Guan You Chen from Taiwan. There’s a lot of drilling and welding involved here, but not at present.

For the Manufacturing Team Challenge, competitors must make a battery powered recovery vehicle with the help of what seems include industrial quantities of Mars Bars.

In Prototype Modelling they use something called a Kunzmann Frasmachine WF 410, which also has a big role in Polymechanics and Automation.

The Kuzmann Frasmachine is particularly handy for “producing and installing parts for production machines” according to the information available.

The gold medal for Polymechanics and Automation looks to be shaping up between China, Switzerland, Taiwan, and Lichtenstein.

Moving on, we find Plastic Die Engineering, where they make stuff to make stuff. Just around the corner is the trio of CNC Turning, CNC Milling and Mechanical Engineering CAD.

The “C” in all these refers to computers and at least one of them involves robots like the demonstration model nearby assembling Rubik’s cubes.

Electronics is reassuringly about wires and flashing lights but Mechatronics sounds more like the character from a Transformers movie, even though it is actually about automated systems.

Turning the corner reveals Mobile Robotics, the first proper spectator sport at WorldSkills Abu Dhabi, with its own mini-grandstand in front of the arena where teams must move robotic vehicles around an obstacle course.

At this early stage in the competition, though, it’s mostly immobile robotics.

Industrial control seems to involve wiring up boxes with a big red “stop” button, while Electrical Installation and Refrigeration and Air Conditioning are exactly as they sound.

In Plumbing and Heating, a vocation which in my home country of Britain you take up because there is not enough money in investment banking, contestants must build a working bathroom. They have four days to finish, as opposed to four months in the UK.

Information Network Cabling involves a lot of wires and is in a dead heat with Freight Forwarding (think DHL v Aramex) as the competition least likely to threaten the Uefa Champions League as a mass spectator sport.

The most delicious part of WorldSkills Abu Dhabi is Baking, with the scent of fresh baked loaves filling the air, and Cooking, where stern-looking judges in towering touques observe those most skilled in competitive sautéing, before the dishes are served by the aspiring champion waiters of Restaurant Services.

In Patisserie and Confectionery, the talk was of the smoothness of the sugar paste and the silkiness of the chocolate ganache.

For Heavy Vehicle Maintenance there are giant road rollers to be fixed and a real Abu Dhabi Police helicopter for Aircraft Maintenance. At Car Painting, the contestants have been given a fleet of black Mercedes (“Not for painting. We’re only allowed to put marking tape on them” explained Tony from New Zealand.)

In an air conditioned tent, 20 young florists laboured on their creations, while nearby, meters of polka dot fabric was laid out for Fashion Technology.

For Hairdressing, contests cut and snip at mannequin heads, but in Beauty Therapy and Health and Social Care, real live volunteers are needed to be smeared with creams and tucked up in bed.

At the farthest flung corner, over the highway and in another tent by the water’s edge, dozens of young bricklayers are going for gold, and the Wall and Floor Tiling contests work on a design that incorporates Etihad Towers and the Sheikh Zayed Mosque.

And there is nothing quite like the sight of nearly 30 desert gardens, complete with palm trees, being built simultaneously under competitive conditions.

And there you have it; nearly 60 countries and 51 skills, four hours and seven kilometres later. WorldSkills Abu Dhabi 2017. Someone deserves a medal.