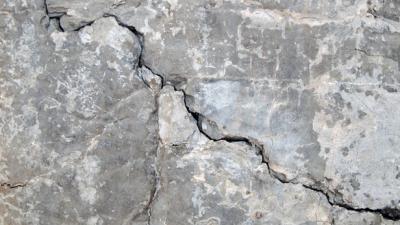 The concrete contains a fungus that produces calcium carbonate when exposed to water and oxygen (Credit: paisan191/Depositphotos)

Jan 20, 2018  -  The concrete contains a fungus that produces calcium carbonate when exposed to water and oxygen.  If cracks in concrete can be fixed when they're still tiny, then they can't become large cracks that ultimately cause structures such as bridges to collapse. It is with this in mind that various experimental types of self-healing concrete have been developed in recent years. One of the latest utilizes a type of fungus to do the healing.

Inspired by the human body's ability to heal itself, the concrete was created by Congrui Jin, Guangwen Zhou and David Davies from New York's Binghamton University, along with Ning Zhang from Rutgers University. It incorporates spores of the fungus Trichoderma reesei, along with nutrients, that are placed within the concrete matrix as it's being mixed.

Once the concrete has hardened, the spores remain dormant until the first micro-cracks appear. When they do, water and oxygen find their way in. This causes the spores to germinate, grow, and precipitate calcium carbonate, which in turn seals the cracks.

"When the cracks are completely filled and ultimately no more water or oxygen can enter inside, the fungi will again form spores," says assistant professor Jin. "As the environmental conditions become favorable in later stages, the spores could be wakened again."

The research is still in the early stages, however, so don't go looking for the fungi concrete in a structure near you anytime soon. In the meantime, however, scientists from both Newcastle University and the University of Bath have been developing self-healing concrete that incorporates calcium carbonate-producing bacteria.

A paper on the Binghamton research was recently published in the journal Construction and Building Materials.