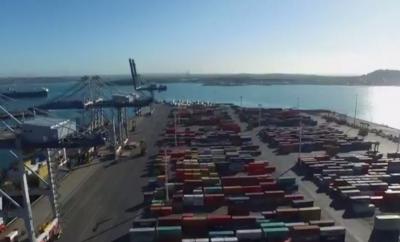 1-Stop Connections (1-Stop) is the chosen IT solutions provider for the joint venture between Ports of Auckland (POAL) and Port of Napier (PON). 1-Stop is also the provider of choice for container terminals in Australia and the Philippines.

“Ports of Auckland and Napier Port are the gateways to two of the largest North Island provincial economies with significant growth and demands on infrastructure,” says Ports of Auckland Chief Executive, Tony Gibson.

The partnership will allow Auckland and Napier to work together to find ways to optimise services for freight customers and achieve further scale and efficiencies in the supply chain. It will prompt even greater competitive contestability and resilience in New Zealand’s supply chain to help lower costs to exporters and importers.

“There is a natural fit between Ports of Auckland and Napier Port. We share a similar way of working, common customers and supply chain opportunities and have similar ownership structures so that’s a great base to work from,” he added.

POAL’s commitment to improvement led to the launch of 1-Stop’s VBS in 2007. The VBS introduction was achieved because of widespread industry collaboration, which included representatives from border security, shipping lines, trucking companies and freight-forwarders. Initially presented in a trial format at the Axis Fergusson terminal, the early results of the VBS quickly proved it was creating a more efficient platform for trucks to operate within.

PON implemented 1-Stop’s VBS in 2015, to allow road carriers to book timeslots for the pick-up or delivery of containers. The VBS is instrumental in catering for increased truck volumes while simultaneously reducing turnaround times.

Michael Bouari, CEO, 1-Stop assures that the focus will be on working together with the two ports to achieve a common goal. “We will continue to work collaboratively with both terminals to ensure that 1-Stop’s products can seamlessly manage any increases in volume due to both terminals expanding dock side and inter-modally over the coming years,” says Bouari.

Since 1-Stop introduced the Vehicle Booking System, port communities have benefited through:

· Reduction in queue times: 2 to 4-hour queue times to mostly no queues at the terminals.

· Decreased TTT: Truck Turn Times at some terminals were reduced from 91 minutes to 37 minutes (and in some cases as low as 15 minutes’ averages)

· Decrease in dwell times: By 30% in the first 2 weeks of operation

· Increased utilisation: Trucking companies are experiencing up to 5 times more utilisation per truck

More in this category: « Port Taranaki signs contract for new tug CentrePort to Secure Cranes as Recovery Continues »
back to top
Jul 10, 2018