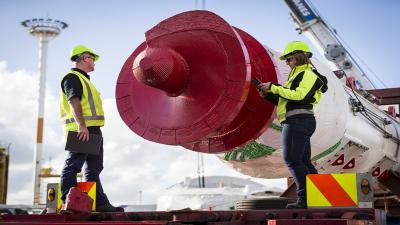 For the second year running, Ports of Auckland has been selected as a finalist for the Best Seaport in Oceania, the only New Zealand port to make it through to the finals.

Ports of Auckland was voted into the finals of Asia Cargo News' Asian Freight, Logistics and Supply Chain (AFLAS) Awards by industry peers and customers.

In 2016, Auckland's port beat out three major Australian ports to win the category.

"It is fantastic to be chosen as one of the best seaports in the region by our industry peers for another year. Our people have been working hard for our customers, building strong relationships and ensuring we're doing our best to deliver the utmost value for them. This is well-deserved recognition for our team" said Ports of Auckland Chief Executive Tony Gibson.

This year, thousands of Asia Cargo News readers cast votes across award categories such as Best Seaport, Best Container Terminal and Best Airport; the latter counts fellow Kiwis, Auckland Airport, as a finalist. Asia Cargo News reported votes in the thousands – a record number of votes were submitted this year.

Like last year, Ports of Auckland is up against three major Australian ports to retain the award; Port of Brisbane, Port of Melbourne and Sydney Harbour. The awards will be held on June 29 in Singapore.