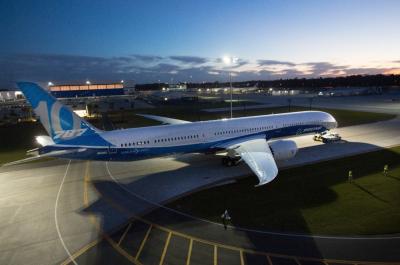 Boeing has whipped the (very long) covers off the latest addition to the Dreamliner family. The 787-10 was launched during President Trump's visit to the Boeing factory in South Carolina, and blends the outstanding fuel efficiency of the existing 787-8 and 787-9 with room for even more passengers.

Compared to the existing 787-9, the 787-10 has gone through a fairly serious growth spurt. The new plane is 18 feet (5.5 meters) longer, which helps free space for 330 passengers in a two-class cabin, a 14 percent improvement over the 290-passenger 787-9. Boeing also says there's also room for 15 percent more cargo than before, giving airlines even more space to overcharge for baggage they'll inevitably break.ADVERTISINGinRead invented by Teads

Although it can't match the smaller members of the Dreamliner family, the 787-10 is still much more efficient than planes of a similar size. Boeing says its new model uses up to 10 percent less fuel than its nearest competitor, and 25 percent less than the planes it's likely to replace. Not only does that represent a significant cost saving for airlines, it also should help cut emissions across the whole industry, something that benefits everyone.The 787-10 Dreamliner will seat 330 people

"This airplane, the most efficient in its class, is the result of years of hard work and dedication from our Boeing teammates, suppliers and community partners in South Carolina and across the globe," says Kevin McAllister, Boeing Commercial Airplanes president and CEO. "We know our customers, including launch customer Singapore Airlines, are going to love what the 787-10 will do for their fleets, and we can't wait to see them fly it."

The new Dreamliner will be arriving with airlines in 2018 and, given that Boeing has already received 149 orders, they shouldn't be hard to spot at the world's airports. The plane will make its maiden flight in the coming weeks.