The airlines that have removed Israel from their route maps 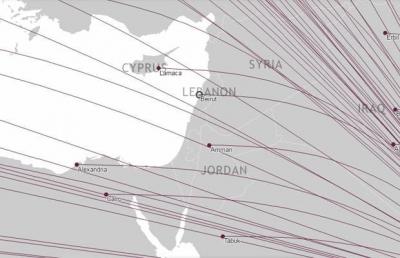 ave you ever drifted off on a plane, woken up a little later, and found yourself wondering where exactly you are – only to check your seatback television screen and decide that you are none the wiser?

Airline route maps – particularly the electronic ones which are part of passengers’ in-flight entertainment systems – can often appear to show a world of their own creation. They pick out cities you have never heard of, towns where aircraft rarely land and destinations which you would not seek out – even if you were travelling on the ground.

But a bigger question might be – what do these maps fail to show? And why are certain places omitted?

Sometimes, destinations drop out of focus for simple reasons of logistics. Back in 2009, there was a brief and polite furore in New Zealand after three cities – Hamilton on the North Island; Dunedin and Queenstown on the South Island – were left off Air New Zealand’s route maps, even though the airline flew to all three.

A spokesman quickly blamed “space restriction”, and pointed out that two Australian cities – Cairns and Coolangatta – were also missing for the same reason.

But what of omissions with more thorny causes?