Boeing Dreamliner draws itself in sky over entire USA 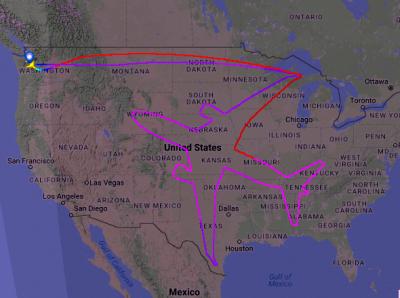 It could be the largest sketch in history – Boeing has used one of its B787-8 Dreamliners to draw a huge image of the plane over the entire continental United States, etched by its own flight path.

The extraordinary journey, designed as a creative way for the plane to make an endurance test flight, happened last week. The shape was so huge that the only way of discerning it was by looking on air traffic sites like FlightAware and FlightRadar24.

Boeing said the B787-8 Dreamliner crossed 22 states to form the giant outline. It took off from Boeing Field International Airport in Seattle and landed back there more than 18 hours later. The “wingspan” of the giant image extends from the Great Lakes almost to the Mexican border.

“Rather than fly in random patterns, the test team got creative,” Boeing explained.

The stunt drew a bit of criticism, with Quartz.com pointing out that the trip produced more than 300,000 kg of carbon dioxide. Endurance tests are necessary, however, and flying in the shape of a plane is no worse than flying in straight lines – and more fun for the pilot. It wasn’t a joy ride.

Earlier this year, a Boeing 737 MAX traced “MAX” in the sky to prove it could fly nine hours straight.