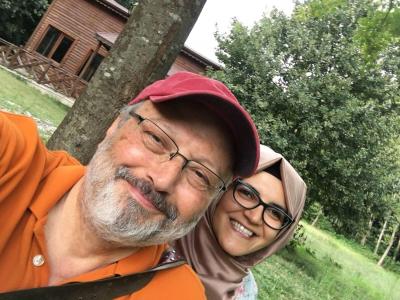 The disappearance of Jamal Khashoggi inside the Saudi Arabian consulate in Istanbul removed a critic that the Desert Kingdom’s dynastic ruler believed was about to turn up the heat on them.

The risk of the consequent adverse affects of leverage against the Saudi regime was viewed as trivial compared with the damaging effect of the inside information that the one-time royal courtier was about to spill.

This information centred upon the Saudi regime’s involvement with the 9/11 attacks.

Mr Khashoggi, a relative of the late middleman Adnan Khashoggi, had been a palace insider until quite recent years.

His disaffection with the regime gathered in intensity following the failure of the Arab Spring and the iron-fisted determination of the regime to ensure that it did not spread to Saudi Arabia.

A year ago he set up in the United States and contributed a regular opinion-piece to the Washington Post.

In relation for example to the newspaper’s campaign against President Trump, his contributions on the accelerating autocracy of the Saudi regime were measured and matter of fact, informing the readership of what all but the Kingdom’s most die-hard supporters already knew.

The fear therefore grew within the regime that the journalist either of his own volition, or prompted by the competitive nature of free-world journalism to come up with something new and startling might reveal what he knew about the extent of the ramifications of 9/11.

The regime regarded the by now quite elderly, for a journalist, onetime palace operative as becoming increasingly unpredictable and erratic and making the transition from a gadfly commentator role to that of a full fledged regime-shaker, a role much exalted at the Washington Post and one multiplied when the target does not subscribe to the newspaper’s own values.

Mr Khashoggi still appeared to be under the impression that he was secure from retribution providing that he did not set foot in Saudi Arabia itself.

This belief was obviously strengthened at the time of his initial visit to the consulate in Istanbul in order to take possession of the certified divorce papers he needed in order to conclude a marriage with his Turkish fiancée (pictured).

Lulled, he turned up for this his second scheduled visit at the appointed time, and vanished.

In the comings and goings of the delegation from Saudi Arabia which simultaneously converged on this same consulate much attention will subsequently focus on the dog-leg to friendly states made on the return journey from Istanbul to Saudi Arabia by the two chartered passenger jets carrying the delegation.