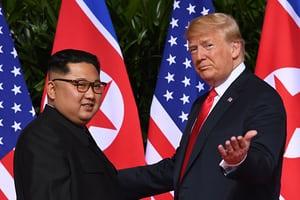 US President Donald Trump and North Korean leader Kim Jong-un have met for an historic summit in Singapore today.

Overseas tariffs on New Zealand products to the amount of $220 million will be cut back or eliminated under the Comprehensive and Progressive Trans-Pacific Partnership (CPTPP) trade agreement.

Colombia is the latest country to seek admission to the trans-Pacific trade pact, the CPTPP, which US President Donald Trump tried to kill off

Will Mexican avocados soon be available in New Zealand Supermarkets?  It would appear this could very well be the case as reported in the following article run on FreshPlaza

New Zealand is keeping pressure on the EU as formal talks to set an agenda for negotiating a free trade agreement are a few weeks away.

The United States has been singled out by some of its closest allies over the imposition of tariffs that they warn will undermine open trade and weaken confidence in the global economy.

BEIJING (AP) — U.S. and Chinese officials have discussed specific American export items Beijing might buy as part of its pledge to narrow its trade surplus with the United States, U.S. Commerce Secretary Wilbur Ross said Sunday as the two sides began a new round of talks in Beijing aimed at settling a simmering trade dispute.

Brexit should be good for NZ as we head the trade deal queue, says High Commissioner

The High Commissioner to Britain believes New Zealand will be better off overall as a result of Brexit, with a country that "needs some wins" eager to enter free trade negotiations, with little experience writes Hamish Rutherfordfor Stuff.