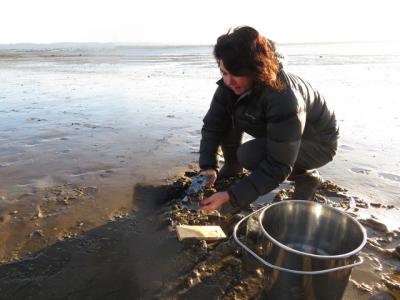 Funded by the Government’s Waste Minimisation Fund, the research results will be used to increase understanding of the nature and source of plastic microparticle contamination in New Zealand’s aquatic environment so that long-term solutions to minimise contamination can be established.

“Microplastics in waterways and marine environments are a growing global issue,” says James Walker, Deputy Secretary Partnerships and Customers at the Ministry for the Environment.

“We need to improve our understanding of the nature and origins of microplastic contamination in New Zealand, so we were pleased to support this study by Scion through the Waste Minimisation Fund as a first step.”

The ‘Turning the tide on plastic microparticles’ study began in July with collection of sediment samples. Auckland was chosen as the sampling area because it is New Zealand’s most populated city with diverse zones including high industry, commercial, residential and parkland next to aquatic environments. Samples were taken at the high-tide mark from 39 sites across Auckland in a variety of zones.

Scion is now analysing the samples in its laboratories in Rotorua. Analysis will identify, quantify and characterise the microplastics found in each location. Information about the local land use activity and environment will be included as part of the microplastic litter profiles for different locations.

Florian Graichen, Scion Science Leader for Biopolymers and Chemicals, says results will be used initially to increase public awareness and educate relevant industry sectors about the problem and consequences of plastics in our waterways.

“The next stage will be coming up with a plan to remove the dominant sources of these microplastics before they enter the New Zealand environment, and ideally introducing alternative options, such as biodegradable plastics, into manufacturing applications,” says Dr Graichen.

The scientific team is a collaboration between Scion and the University of Canterbury. Scion has expertise in plastics and chemical characterisation; UoC has experience in project design for this type of coastline research and in plastic microparticles. The Packaging Council New Zealand has also invested in the study, and Auckland Council and WaterCare assisted with field support and resources to increase the number of sampling sites.

The research findings will be reported in March 2019.

.be">View the video story on the research project (90 sec.)
Published in ENVIRONMENT
Tagged under