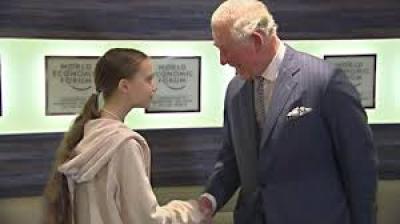 Royal Embodiment of Opposing Cults is a Dilemma for Commonwealth Commentariat

In the person of Prince Charles resides for activists the opposing poles of their group ideology. He towers over the climate movement. He is the beacon of inherited white privilege. Prince Charles actively took up the umbrella cause of climate long before most progressives realised that it was even a cause in the first place.

This conflict becomes visually evident in public television. Here the words “climate change” are rendered with a look of pious pleading. A few segments later Prince Charles’ name pops up and is accompanied by a look of “does he matter anymore?”

The activist commentariat has a split focus between reverence for the climate cult and a cultivated disdain for the individual who has done most to cause it to happen, Prince Charles.

There is the belief that Charles does not wish to be king. Wrong. He has always been utterly straightforward in letting it be known that he expects to shoulder the Crown, and wants to do so.

Sheltering collectively under the all-embracing climate cult the anti white privilege modernists are painfully coming to terms with the fact that their standard-bearer is the heir apparent and who dived more completely into their climate movement than most of them still dare to do.

He built his power base on republicanism, condemned the monarchy. Then he sought to cement himself into office through climatism. He now seeks to maintain both ideologies concurrently.

One ideology sustains climate as the umbrella cause of our times. The other, the twinned monarchy white privilege consciousness movement, seeks to cancel Prince Charles who more than any other living person has by example led the climate crusade.

The contradiction is that the man who will be king, the heir apparent Prince Charles,(pictured above with Davos associate) embodies Climate.

Climate is the overarching doctrine of the contemporary modernity movement which simultaneously seeks to eliminate Charles and everything he stands for which means….wait for it….Climatism.

Climate is the underpinning of the New Zealand political doctrine, even surpassing the diversity one.

Maori rights are enshrined by the Treaty of Waitangi, an historic agreement between Maori chiefs and the British Crown. No Crown. No Treaty.

The ideological production process line for this jarring contradiction is an extended geographical one.

The progressive ideology is itself esoteric and originates in the West and East coastal enclaves of the United States and then migrates across the Atlantic.

In its various transmitted belief forms it makes landfall at the Guardian. Here the raw content is re-packaged into softer quizzical ideological versions crafted for Commonwealth consumption.

The BBC picks it up and in doing so gives it the imprimatur of the received wisdom, the ideological equivalent of the Stamp of Good Housekeeping.

It now gets swiftly relayed to other Commonwealth government broadcasters in Australia and also New Zealand where presenters for example are encouraged to give the nation their own favoured replacement name which is Aotearoa.

Back now to Prince Charles, the great Re-setter in Chief and who discovered climate long before it became an emergency or even a crisis.

This princely ecologist was a victim of a real emergency-crisis and one that could have led to his own extinction. He became infected with Covid-19.

White privilege was not enough to protect the Prince. Now himself a bona fide victim in a victim culture did the Prince of Wales whine or even mention this ill-fortune?

He did not, simply using his plight as a springboard for advocating a natural alternative approach to diseases. Yoga he proclaimed was an ideal recovery path for Covid victims.

The cultural elites which now guide public broadcasting do so through propagating the belief that they were there first as an ecological conscience. Actually Charles was, pumping out simultaneously the heritage message along with the natural cures one too.

Redeemers such as Malcolm Turnbull and his cohorts of co-believers to whom climate means colonising the popular conscience are now themselves Guardians of a covert question.

In the bracketed yet seemingly irreconcilable twin cultures of climate and white privilege HRH is both foe and friend to the progressives and thus for them cancels himself out.