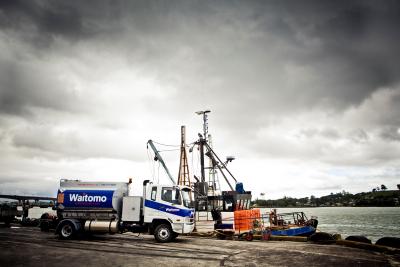 Independent fuel supplier, Waitomo, is taking a big leap forward for New Zealand’s petroleum industry by installing Vapour Recovery technology at its new Fuel Stop on the Bombay Hills, due to open on 29th May.

Vapour Recovery is still in its infancy in New Zealand – only a small handful of fuel sites currently feature this technology at the dispenser nozzle.

Waitomo is a 100% Kiwi-owned and operated company and has invested in the best technology available to help look after the environment and reduce emissions when dispensing petrol.

“We have already installed Vapour Recovery for our tankers at Fuel Stops so when they deliver fuel, the petrol vapour is returned to the tanker instead of escaping out of the vents and into the atmosphere,” Ormsby explains. “So it was logical for us to take that next step and install Vapour Recovery at the dispenser nozzle as well.

“While you’re dispensing fuel into your tank, the vapour is recovered by a vacuum unit so there are no nasty fumes. It is then condensed and returned back into the Fuel Stop tanks. To be clear, this technology does not reduce the amount of petrol our customers are dispensing – it is simply capturing the vapour that would have escaped into the atmosphere or been inhaled.”

Ormsby says the technology represents a significant investment for Waitomo. “If we were not in business for the long haul then it probably wouldn’t stack up. But we believe it is the right thing to do. It’s good for our customers, good for the environment and good for our business.”

Waitomo’s new Fuel Stop at Bombay, just off the Southern Motorway, will feature petrol and diesel pumps under a canopy for light vehicles, and a separate area for heavy vehicles which will have access to high flow pumps and Go Clear (Diesel Emission Fluid). Both areas have plenty of space for manoeuvring.

As with all of Waitomo’s sites, prices will be competitive and company fuel cards are available.

“Opening our Bombay Fuel Stop is another significant milestone for us,” says Ormsby. “This gateway links the North Island’s three main areas of economic growth, namely Auckland, Waikato and the Bay of Plenty. We’re really proud to extend our Fuel Stop network even further and help raise our profile among the wider public.”

Waitomo will celebrate 70 years in business this June after being founded by Ormsby’s grandfather, Desmond, on the principles of honesty and integrity. The company’s motto is “Kiwis fueling Kiwis” and Waitomo now has 70 Fuel Stops and Service Stations across Northland, Auckland, Waikato, Bay of Plenty, Taranaki, Hawkes Bay and Manawatu-Whanganui.

Hunua MP Andrew Bayly will attend the grand opening on 29th May. He is a supporter of “responsible growth” and the new Vapour Recovery enabled site will support economic development within the region while minimising environmental damage.

Waitomo’s own fleet of mini-tankers will also benefit from the new Bombay development. “Our mini-tankers deliver bulk fuel to a wide range of industrial, commercial and private customers in the Bombay area. We’ll now be able to load them up at Bombay instead of the Wiri terminal, giving them a bit more range,” Ormsby says.

“It will also be another location that our large tankers can empty out before returning to Wiri.”

The new Bombay Fuel Stop is just one of several new developments Waitomo currently has underway. Work has now begun on a new Fuel Stop in Palmerston North and two new trucks from Dutch manufacturer DAF will soon join the company’s existing fleet of 25 Mitsubishi FUSOs to cater for growing customer demand.