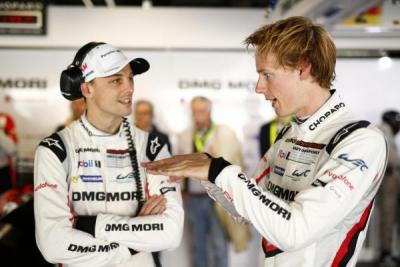 Kiwi drivers Earl Bamber and Brendon Hartley won the 2017 24 Hours of Le Mans with Porsche but their days in the LMP1 team are limited, with the German manufacturer announcing its withdrawal from the class after November’s final round.

The future of Porsche's two New Zealand factory drivers, Earl Bamber and Brendon Hartley, remains secure, despite the manufacturer's decision to withdraw from the LMP1 class of the FIA World Endurance Championship (WEC) at the end of the 2017 season. An announcement was made this week confirming that from 2019 a Porsche works team would compete in Formula E, the world's first purely electric racing series. That effectively leaves LMP1 team-mates Bamber and Hartley without a drive in 2018, as Porsche plans to redirect its focus to international GT racing.

Its motorsport strategy involves using the 911 RSR in the GT class of the WEC, the highlight of which is the 24 Hours of Le Mans, as well as the American IMSA WeatherTechSportsCar Championship and other long-distance classics.

However, the press release promised Porsche would keep the successful LMP1 team ‘‘fully intact, including the factory drivers''.

‘‘Alongside ventures in other racing series and the intensive preparation for Formula E, Porsche is examining other fields of application and development areas,'' the release stated.

New Zealand Porsche sales and marketing manager Jamie Taylor said he believed Bamber and Hartley had ‘‘achieved a level of success'' that should mean they will remain with the Porsche works team.

The official driver announcements will not be made until Porsche's annual motorsport dinner in November or December, Taylor said.

Porsche will leave the LMP1 class behind after four successful years, which included three consecutive victories at the 24 Hours of Le Mans and World Championship titles in the team and driver classification in 2015 and 2016. Nevertheless, this year the works team from Weissach wants to defend the two World Championship titles one more time. The season ends on November 18 in Bahrain.

Taylor had recently spoken to Bamber and said the young Kiwi driver's focus was on the remainder of this WEC season.

‘‘He hasn't had the opportunity to win a [WEC] and Brendon has. He'd love to continue on as a Porsche factory driver, but in what capacity, I'm not sure,'' Taylor said.

Bamber, who is a two-time Le Mans winner with Porsche, was not in the 2015 or 2016 teams with Hartley when he claimed the WEC title for Porsche with Mark Webber and Timo Bernhard.

Coming from a GT background, Bamber graduated from this class to the ultimate LMP1 category several years ago. It means he is familiar with the GT cars and perfectly poised to step back into the class with Porsche.

As far as the Formula E class goes, both New Zealanders have plenty of single-seater experience, which would allow them to transition to the category. Launched three years ago, Formula E was organised by the FIA to make a statement in favour of electromobility and to get more young people excited about motorsport.

Unlike most other series, the season begins in the autumn and ends in summer. The race venues are specially-designed street courses in the heart of major cities.

New Zealander Mitch Evans has been competing in Formula E, making his debut this season in the Panasonic Jaguar Racing team.

Like Evans, Hartley and Bamber also made their way up through the ranks in New Zealand's Toyota Racing Series. Bamber did some more single-seater time in the A1GP series in 2009, while Hartley also did several Formula 1 stints as official reserve driver for both Red Bull Racing and Scuderia Toro Rosso.

It won't be long before the two high-flying Kiwis could be testing a Porsche Formula E, as the manufacturer has already taken the first steps towards developing its own car this year.

‘‘Porsche is working with alternative, innovative drive concepts. For us, Formula E is the ultimate competitive environment for driving forward the development of high- performance vehicles in areas such as environmental friendliness, efficiency and sustainability.''

He believed the move to Formula E was an ‘‘exciting time for the motorsport programme'' and would have flow-on effects off the race circuits as well.

‘‘Porsche motorsport is the test bed for the road-going cars,'' Taylor said.