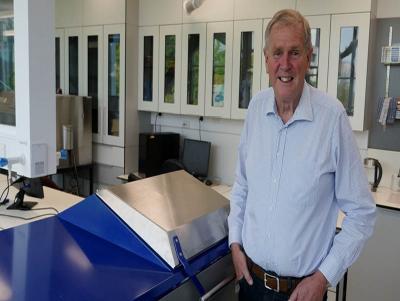 Professor Butler and the MARS scanner is attached. Photo: University of Canterbury.

Internationally respected Physics Professor Phil Butler has been announced as the 2018 recipient of the University of Canterbury (UC) Innovation Medal, the highest award the University can bestow to an outstanding innovator.

A professor of Medical and Theoretical Physics in UC’s College of Science | Te Rāngai Pūtaiao, Professor Phil Butler is a world leader in the development and commercialisation of medical imaging and laser-based treatment.

Renowned as a predominant driver in the excellence of innovation and development of medical technology, Professor Butler’s work on the MARS spectral x-ray scanner, developed in collaboration with his son, Professor Anthony Butler, is of particular note.

Producing images with significantly improved diagnostic information, measuring the x-ray spectrum to produce colour images instead of black-and-white, and showing different components of body parts such as fat, water, calcium, and disease markers, the MARS scanner is widely considered to be a breakthrough in x-ray imaging.

The scanner has the potential to revolutionise medical imaging within Aotearoa New Zealand and overseas, particularly in the diagnosis and treatment of diseases such as cancer and heart disease, because it provides far greater detail of the body’s chemical components.

“The MARS spectral scanner is a truly world changing innovation and I look forward to presenting him with the UC Innovation Medal at the Chancellor’s Dinner next month.”

Starting as an undergraduate then postgraduate student, Professor Butler has spent the majority of his adult life on the UC campus.

Since graduating to teach the next generation of undergraduate and postgraduate students, Professor Butler has published over 800 research publications, spent eight years as Head of the Physics and Astronomy Department, three years as the Pro-Vice-Chancellor (Resources), and was named a Fellow of the New Zealand Institute of Physics.

The Innovation Medal is awarded by the University Council for excellence in transforming knowledge or ideas so they are adopted by the wider community in ways that contribute beneficial value.