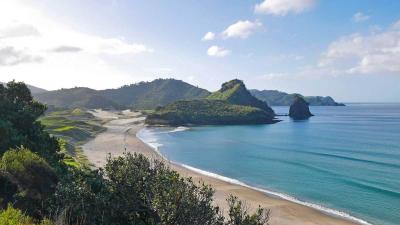 Great Barrier Island off the coast of Auckland.

Residents of Great Barrier island don't want the dredgings from Auckland's port and marinas near their island, but marinas say it has nowhere else affordable to go, reports Eloise Gibson for Newsroom.

Auckland’s ports and marinas are all silted up with nowhere to take the sediment – apart from a remote dumping spot 25km east of Great Barrier Island, the Environmental Protection Authority (EPA) has been told.

Works to ready the waterfront for the 36th America’s Cup alone are projected to create 70,000 m3 in sludge that needs to go somewhere.

All told material from dredging marinas around Auckland and, possibly, from Ports of Auckland, will create an estimated 500 percent increase in the amount of silt and sediment needing to be dropped in waters beyond the Hauraki Gulf Marine Park over the next decade, the EPA heard.

Auckland Council’s coastal rules make it difficult to get permission to discharge sediment inside the region’s waters, so barges travel all night and into the next day to reach a dump zone with a 1.5km-radius in New Zealand’s exclusive economic zone. That zone is under the jurisdiction of the EPA.

One company, Coastal Resources Limited (CRL), currently has the only marine dumping permit for the Auckland region, which it has used it to allow marinas and ports to dispose of 223,000m3 of material over the last five years.

More in this category: « Right time to discuss the purpose and role of local government
back to top
Nov 05, 2018