World’s Biggest Infrastructure Project is One You Never Heard Of 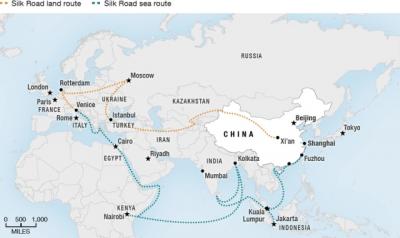 A rather enlightening article posted on engineering.com by Roopinder Tara that has attracted a lot of interest. While the U.S. dawdles with much needed domestic infrastructure upgrades, China is already engaged in a project so massive that it will tilt the Earth in its favor. The trillion-dollar Belt Road Initiative (BRI) is a plan for a web of transportation routes (road, rail, shipping lanes, more—all leading to China) that will be created or expanded over the next 30-plus years. The BRI’s main purpose is to facilitate trade. China, the world’s leading producer of exports, no longer wants to rely on slow moving boats to move its goods out.

BRI not ringing any bells? This development plan for a number of megaprojects was introduced in 2013 as the One Belt One Road (OBOR). The “belt” referred to the roads, and “road,” inexplicably, the sea lanes. It was renamed the Belt and Road Initiative (BRI) at the 2017 Belt and Road Forum(BARF? Really, guys?) in Beijing.

The U.S.—and most of the West—paid scant attention. Even now, as money and concrete are pouring into projects, the U.S. continues to draw inward, led with an “America First” ideology. By the time the concrete is dry on the New Silk Road projects (China hopes to finish by 2049), the economic effect and, later, its political and even military consequences of the New Silk Road could make China the most dominant world super power for centuries to come.

China’s state-run news agency responded with this during the Beijing conference, without any sense of irony: “As some Western countries move backwards by erecting ‘walls’, China is contriving to build bridges.” It was China that built the most famous wall of all time, the Great Wall, to keep out its neighbors to the North.

The New Silk Road will help China connect its far-flung provinces, but most of the development plans seem to be in neighboring countries with global trade partners. The BRI will help connect the heavily populated eastern part of the country with its Western provinces, which are considered underpopulated and underdeveloped. The highly promoted two thousand-kilometer Qinhai-Tibet railway, ostensibly built for tourism, deposits 3,000 Han Chinese (the predominant Chinese ethnic group) into Tibet, and has already made native Tibetans a minority in their own land.

While China has earmarked $900 billion to spend on the New Silk Road, the country is also prepared to loan $8 trillion to over 60 countries, many of them too poor to fund their own big infrastructure projects. One trillion dollars is said to have already been allocated by these countries. By comparison, the entire 47,000 miles of the US Interstate Highway system cost roughly half that amount ($459 billion).