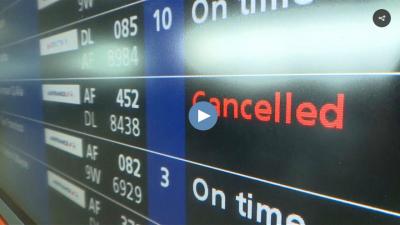 The stoppages are in support of a six percent pay increase.

On Monday German airline Lufthansa warned it would have to cancel around 800 of its usual 1600 flights on Tuesday. The airline's own staff are not striking. The stoppages are due to a walkout of public sector workers that affects more than just the air industry.

"I think many passengers who don`t have the possibility to rebook and who have expensive flights are the losers of the whole story and therefore I think that`s not fair," said one German passenger.

However, there was some sympathy for the strikers in Germany:

"I understand that they want to have more money but if you are personally affected then it is not so good but of course I can understand it."

The busiest German airports affected by the action include Frankfurt, Munich, Cologne and Bremen. Lufthansa said normal services would be resumed on Wednesday. The airline said about 90,000 passengers are affected.