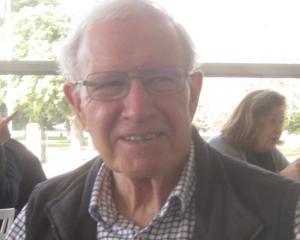 In 1956 schoolboy Brian Bourke found himself in an Ashburton hospital ward, a victim of New Zealand’s annual and brutal polio wave.

He was one of 897 victims in New Zealand that year of the polio virus.

Nationwide that same year 50 other victims were not so lucky. They lost their lives.

Mr Bourke a chartered accountant recalls now that his nurses were completely shrouded in sterile material and he was not to identify any one of his carers until many years later when one of them Monica McCormack recognised him at a church service and introduced herself.

When after 192 days in hospital he eventually returned to school Mr Bourke recalls that fellow pupils were wary of him, fearful that they might catch the polio virus from him.

In the event Mr Bourke (pictured) went on to establish himself in New Zealand’s North Island with an accountancy practice and a number of directorships.

Challenging the disadvantages presented by his withered leg he embarked upon distance swimming and represented New Zealand at a Masters’ tournament in Brazil.

More than 800 New Zealanders died from polio also known as infantile paralysis between 1916 and 1961 when the annual epidemic waves finally succumbed to the vaccine developed by Dr Jonas Salk.

The virus was associated with respiratory ailments and those most severely afflicted often required artificial breathing support.

Conversely and curiously in the light of the current Covid-19 plague taking its biggest toll on the unfit and the elderly the polio virus in contrast attacked the young and the vigorous such as Mr Bourke.

Equally conversely, the polio virus thrived in summer rather than in winter said to be the favoured transmission season for Covid 19.

The introduction of the Salk vaccine intercepted the polo virus prior to the era of mass travel which has proved such a contagion thoroughfare for Covid 19.

Pivoting agilely on the stick which compensates for his prosthetic left leg Mr Bourke who is now 78 knows that he is among the last who can testify through experience to the annual summer polio waves which left in their wake the paralysis of which he is a living victim.

The annual summer intervention of the polio virus which put him in the isolation ward of Ashburton hospital is fading over the institutional memory horizon he notes. Social distancing in the polio era for example centred on shuttering schools, swimming pools, theatres and amusement arcades.

Mr Bourke with his wife Margaret went on to have seven children and he remains a signal figure in community activity.

A lean, tallish fellow with the engaging smile of those sensing their own gift of life redeemed, Mr Bourke a carpentry buff by day and who at night dabbles in poetry believes that the fear and trembling evoked by Covid-19 should be put into human perspective………

“In 1956 we all feared polio because it had a preference for children. There is nothing like it around now. The symptoms were like a very bad dose of the flu with a severe fever. The effects were very different. The paralyses were swift. We were utterly defenceless against it. Doctors had no answer. ….

“When I arrived at hospital they were not sure if I had polio and they put me in a small room with green walls and no window to the outside. They gave me a lumber puncture in the late afternoon and then left me alone. That’s when the paralyses started. I could feel it coming on. I had a strange feeling in my left arm and my left leg. The nurses did not come to check on me. I got out of bed and walked up and down that small room until I could not walk anymore and I collapsed on the floor…

“The others in my family were not allowed to go to work or attend school. Nobody came to visit them and they only went out to buy food. They sat around in the dreary nor-west heat of early 1956 and wondered if they could drink from the same cup or if they should wash all the dishes again……”

In the meantime and declining to succumb to the ravages of age any more than he did to those of polio Mr Bourke nowadays in a self-imposed act of defiance hosts an annual swimming gala in which he personally swims an extra pool length for each additional passing year of his life. 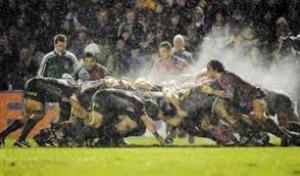 Instinct is up close, personal and infectious

Antipodeans instinctively keep their distance from each other. Right or wrong?

Wrong. The inhabitants of the thinly populated South Pacific outpost of British reserve and stand-offish-ness cannot in fact keep their hands off each other

Touching and feeling is the raw material of social codes of behaviour new and old.

These range from modern introduced sporting activities through the run of hugs, kisses, and handshakes to greetings ancient characterised by the Polynesian hongi or rubbing of noses.

The myth is that of the man-alone. The reality is that of the direct opposite. Males of all provenance embrace a tribal lifestyle often described as mateship in which they adore congregating and will commingle together as closely as they can. Whenever they can.

Mandated distances between non familial or non-bubbled humans in New Zealand as elsewhere is two metres and when proclaimed the distance was promulgated in a vein of this being a natural state of separation, removal, anyway.

Yet as we have seen the fervently-followed collection of ancient and modern social customs and practices runs counter to the notion of New Zealand males naturally keeping their distance from each other.

A more recent example of a socially–licensed custom which by definition encourages males to commingle are the officially sanctioned and even encouraged gay parades characterised by males intertwining with each other in order to demonstrate quite literally their solidarity.

Society issues its licence for such parades in what as seen as the public interest of “diversity.”

Rugby football in the event is a reprise of mating rites dating back to the dawn of time.

In its modified and current form it bestows social license on males to achieve a physical proximity otherwise denied to them and confers simultaneously license for a wider spectrum to observe them in this process, and to shape a conversational philosophy around it.

Opponents of this above conclusion when they feel free to discuss the issue, which is rare, say that the other Anglo Saxon-origin sport of cricket in contrast is designed by its nature to keep men apart, at a distance from each other.

A similar pattern of attraction however is now emerging and is in plain sight. It is now observed that an underpinning mating-cum-fertility ritual has begun to assert itself in the form of onlooker spectators seeking every opportunity for physical proximity to the team players.

For example, spectators deliberately position themselves close to team entrance and exit tunnels in order to grasp and then cradle and cuddle the heads of certain players, otherwise total strangers, as the players pass to-and-fro.

The head-hugging now so familiar in cricket and its derived sports such as softball is a conundrum bearing in mind that in so many countries the human head is a true taboo.

In short, far from being keep-your-distance types, the average Antipodean cannot wait to deliver a man-hug.

For further evidence to support this conclusion we can examine the behaviour of people during the height of the recent Coronavirus lock down which permitted supermarkets to open as essential service providers.

But this came with the caveat that shoppers do so singly, one family member at a time, rather than on a familial group basis.

In the event otherwise responsible members of the community were observed as couples determinedly doing their shopping together, regardless.

In other words, the social license conferred by their pair bonding arrangements of these couples, ones such as marriage, superseded external commands centred on viral contagion.

In the military distance between individuals is rigidly codified and enforced. Elsewhere in the public service attempts to promulgate and enforce a distance cordon sanitaire between the genders has had only varying success.

In life as a whole we can see that contrary to the established myth, universally believed, individuals will trash artificially imposed distance taboos and huddle as close as they can providing they believe that they have social license to do so.

Far from being stand-offish Antipodeans given the social licence instinctively want to be up close and personal and the closer the better.

International artistes marvel at the gigantic audiences they get in sparsely populated Australasia failing to realise that a large part of this is the compound mass proximity attraction – the more, the closer, the merrier.

Nobody doubts that mandated social distancing has been central to Australasia containing the contagion.

Its continuing success will rely on an understanding that this degree of separation is not a natural state of affairs and that people will still have to be levered apart to keep their distance.