Speaking to the Development West Coast Conference in Greymouth, Mr Wheeler said that in many respects the economy is performing well.

“Relative to the trends over the past two decades, New Zealand is experiencing stronger economic growth, lower inflation, and a lower unemployment rate – even with record levels of labour force participation. The Achilles heel of many New Zealand expansions – a large current account deficit – has not eventuated.

“However, not everything is as positive. The overall expansion, now entering its eighth year, is weaker than other post-WWII expansions. GDP growth on a per capita basis has been slow and labour productivity growth has been disappointing. House price inflation is much higher than desirable and poses concerns for financial stability, and the exchange rate is higher than the economic fundamentals would suggest is appropriate.”

Mr Wheeler said that, in the absence of major unanticipated shocks, prospects look good for continued strong growth over the next 18 months, driven by construction spending, continued migration, tourist flows, and accommodative monetary policy. Supply disruptions associated with the Kaikoura earthquake are unlikely to have a major impact on overall economic growth, while some increase in freight costs and construction cost inflation is likely.

“Our November 2016 Monetary Policy Statement forecasts show annual real GDP growth of around 3¾ percent over the next 18 months, with inflation approaching the mid-point of the target band, the unemployment rate continuing to decline, and the current account deficit remaining within manageable levels.

“The low point for CPI inflation has probably passed and, supported by the improvement in global commodity prices in recent months, we expect the December quarter 2016 CPI data to confirm that annual CPI inflation is moving back within the 1 to 3 percent target band.

“The greatest threat to the expansion lies in possible international political and economic developments and their implications for the global trading environment. The main domestic risk – and one that could be triggered by developments offshore – is a significant correction in the housing market. Numerous measures indicate that New Zealand house prices are significantly inflated relative to usual valuation indicators.”

“As has been the case in several other countries, monetary policy has been made more challenging in New Zealand by low global inflation and zero or negative policy rates in several major economies. This has put downward pressure on our interest rate structure and contributed to asset price inflation and upward pressure on the New Zealand dollar. This trend may finally be turning.

“At this stage, global and domestic developments do not cause us to change our view on the direction of monetary policy as outlined in the November MPS. We expect monetary policy to continue to be accommodative, and that the projected policy settings will help generate sufficient growth to have inflation settle near the middle of the target range.”

The Reserve Bank is taking account of changing household saving and spending behaviours in its inflation forecasts, Deputy Governor Geoff Bascand said in a speech to the Australia National University in Canberra this evening.

Mr Bascand said that Australasian patterns of saving and spending are proving different from other advanced economies.

Internationally, demand dynamics have changed since the global financial crisis (GFC), challenging inflation modelling and, in some cases, inflation-targeting frameworks.

Some economists suggest that we are now in an era of “secular stagnation”, with persistent low demand due to higher saving and a reduced tendency to invest, driving down the long-term real neutral interest rate. Others point to an overhang from earlier excessive debt accumulation and suggest that demand is being depressed by a lengthy period of deleveraging (reduced borrowing).

Across advanced economies, investment has been weak and national saving rates on average haven’t altered significantly since the GFC.

But a different picture emerges in Australasia, which has witnessed an uplift in saving, especially by households, and steady output growth supported by robust investment.

“In Australasia the current outlook looks a lot like that which prevailed before the 2000s. In other advanced economies, weak investment growth, coupled with a disappointing expansion in the supply side of the economy, points to a world more consistent with lower long-term growth expectations.

“To what extent heightened household saving preferences in Australasia represent a permanent shift or a prolonged deleveraging adjustment is uncertain. Some indicators provide tentative support to the view that it represents a prolonged cyclical correction.”

Mr Bascand says the rate of growth of consumption, including the relationship between consumption and wealth, is crucial to the Reserve Bank’s assessment of business cycle dynamics and inflation prospects. Projections of demand arising from historical estimates of consumption from wealth have been over-optimistic. Weaker spending than expected out of higher housing wealth is part of the reason why inflation has been lower than forecast.

He says taking into account the increase in household saving we have seen, the links between interest rates, output and inflation appear stable.

“Currently, we are projecting per-capita consumption growth to improve and provide an impetus to output growth. The acceleration is modest compared to the previous cycle as household saving is expected to remain positive over the forecast horizon.”

Read the speech: Changing dynamics in household behaviour: What do they mean for inflationary pressures?

The annual re-weighting of the Trade-Weighted Index (TWI) takes effect on Wednesday 16 November 2016.

The TWI is a measure of the value of the New Zealand dollar relative to the currencies of New Zealand’s major trading partners. There are 17 currencies included in the TWI and each currency is weighted using the country’s bilateral trade with New Zealand.  The TWI weights for the next 12 months can be viewed here 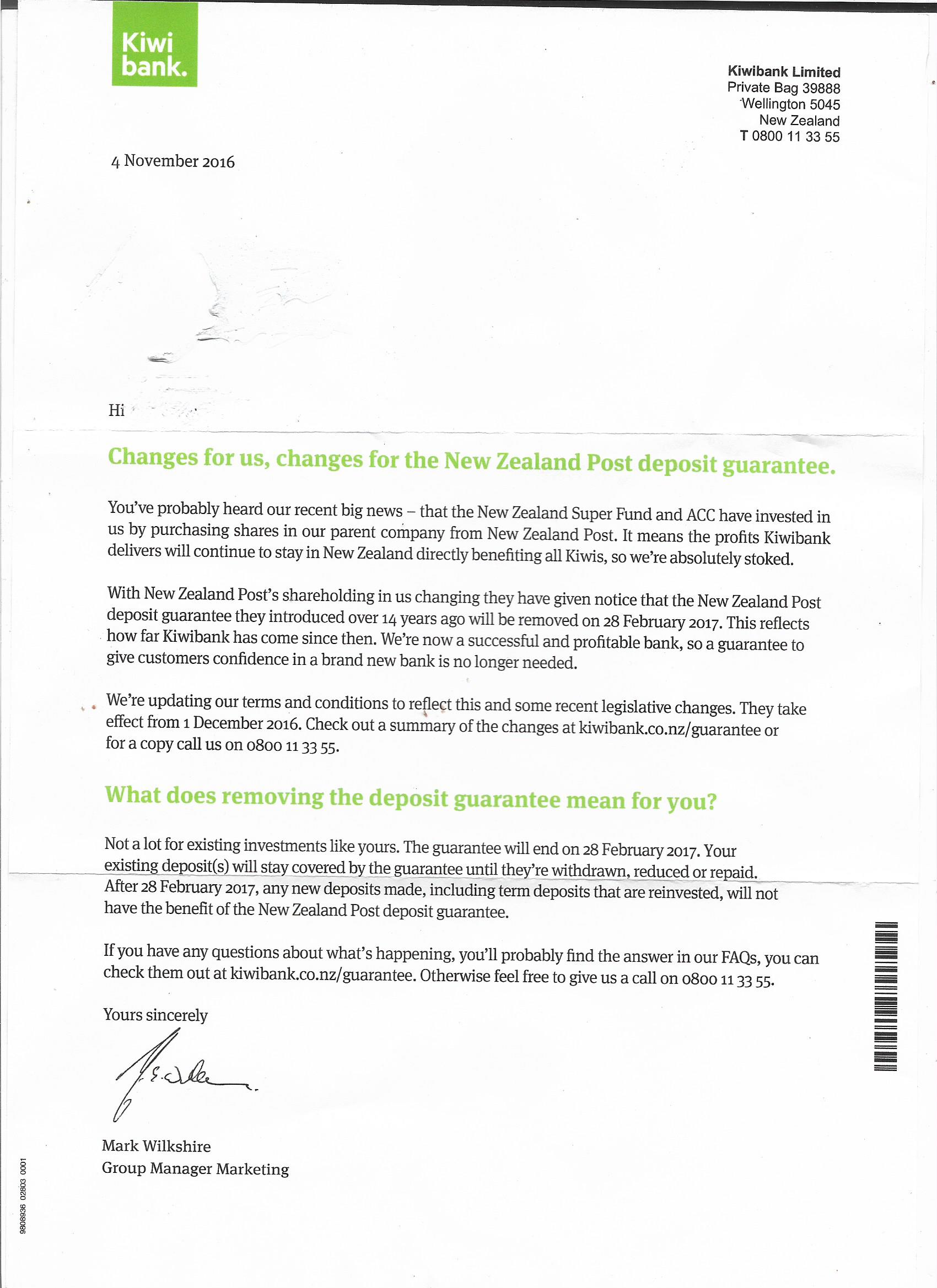 Bank officials proclaim themselves “stoked” by disappearance of depositor protection.

In a remarkable display of modern financial marketing presentation techniques the cancellation of Kiwbank’s deposit guarantee is being portrayed as an advantage for........Kiwibank’s depositors.

The 14 year old deposit insurance scheme will disappear on February 28 next year.

The deposit guarantee was always an important selling proposition for Kiwibank. The reason is that other New Zealand bank deposits are not guaranteed by anyone and certainly not the government.

Kiwibank marketeers are slickly presenting the pending disappearance of the bank deposit guarantee as an example of the bank maturing and generally coming of age.“This reflects how far Kiwibank has come.......We are now a successful and profitable bank...so a guarantee to give customers confidence in a brand new bank is no longer needed.”

The grounds for seeking to convert what is in customer terms is a negative into giving the appearance of a full-fledged advantage attribute is based on the investment in the bank by the New Zealand Super Fund and Accident Compensation Corporation.

“It means the profits Kiwibank delivers will continue to stay in New Zealand directly benefitting all Kiwis.”

Exulting in this somewhat nebulous benefit the letter to depositors (pictured) devolves into street-language in order to express the full measure of its own enthusiasm for the disappearance of the deposit guarantee scheme.  “....So we are absolutely stoked,” declares in his letter to depositors Mark Wilkshire the Kiwibank marketing head.

In the event the investment in the publicly-owned bank has merely diversified. The underpinning is now spread around additional public bodies in the form of the Super Fund and Accident Compensation.

It is not immediately apparent how this public risk-spread will reinforce the retention of profits within New Zealand.

The deftly presented transformation of a marketing drawback, the withdrawal of the guarantee, into a customer benefit underlines though the continuing and misplaced belief that all bank deposits in New Zealand are somehow guaranteed. This continues in spite of assertions, notably from the Reserve Bank, that no guarantee exists.

However the government-sponsored and multi-faceted and attenuated bailing out of the BNZ after the 1987 bust greatly contributed to reinforcing this misapprehension to the effect that all banks, notably the trading banks are covered by a guarantee.

In the event, the publicly-owned Kiwibank was the exception in that its deposits were, and until February 28 will continue to be, underwritten by the state.

Banks are in Business for Profit - not Public Service

Even Keynes got it Wrong

The difficulties endured by the banking sector in seeking to adhere to a set of professional standards are always overlooked.

Published in THE REPORTERS DESK
Read more...
Page 13 of 13