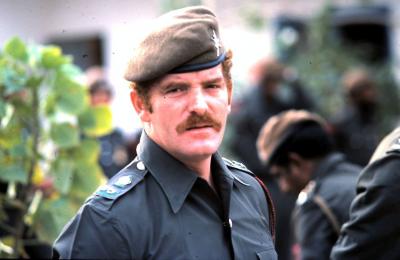 A soldier of fortune turned humanitarian and increasingly recognised pivotal figure in the last Balkan wars is now thought to have had New Zealand origins.

Major Bill Foxton (pictured) who served with the European Commission Monitoring Mission was present at the hinge of history when it became obvious that United Nations by its structure was unable to deal with conflicts such as those in the breakup of Yugoslavia.

The fall of Srebrenica and other towns that the Security Council had identified as safe areas, but then refused to authorize enough troops to defend can be viewed now as the decisive moment for the UN.

United Nations now switched its emphasis away from policing and instead turned to non-partisan idealistic causes that transcended ethno-politics and belief systems and above all sidestepped dangerous interventions in nationalism.

Its fixation on Climate now evolved as its standard-bearing campaign

It was this Balkan vacuum, the one left by United Nations, into which now plunged Major Bill Foxton.

One of the hottest spots in Bosnia was the Bihac Pocket and it was there that Bill Foxton immersed himself for two years of fratricidal in-fighting. “Bosnia’s Forgotten Battlefield-Bihaj” by Brendan O’Shea is dedicated to Major Foxton

After this Major Foxton moved to Sarajevo as the European Commission Monitoring Mission’s training officer.

After Bosnia, Bill Foxton became in May 1998, an unarmed observer for the Organisation for Security and Cooperation in Europe in northern Albania, gaining the trust of the local leaders and of the refugees from Kosovo who were pouring into his area.

“Major Foxton ensured that the OSCE headquarters received a steady stream of accurate information and intelligent analysis from throughout the Kosovo crisis in early 1999,” recalls a general officer in the Balkan theatre

“Bill could not abide unfairness and injustice. As such he was a natural peacekeeper, a peerless unarmed monitor and a perfect candidate for humanitarian work. What made him so effective was his determination to act, in addition to his ability to spot and report accurately on injustice and humanitarian need,” noted the same general officer.

Major Bill Foxton in his career served in Africa, the Middle East, Asia, and Europe itself ever since in fact he joined the Foreign Legion as a 17 year old.

As a soldier of fortune he can be seen now as a transitional figure in the profession of arms, a practitioner whose sword became forged into a ploughshare.

With his red hair, barrel chest, and waxed moustache Bill Foxton started his career with the Legion in the last of the colonial wars in Algeria and continued all the way to Afghanistan and in doing so traversing in a personal way modern history.

Along the way he had become one of the English-speaking military sphere’s foremost linguists conversant with the variegated Balkan languages among many others. He is the compiler of the standard Baluchi-English dictionary.

In June 1999, he was made an OBE for rescuing a child from a minefield in Bosnia.

He had earlier lost his left arm while trying to de-fuse an unexploded shell while serving in Oman, a British protectorate. His forearm now became replaced with a prosthetic with a hook on the end of it.

No stranger to military symbolism Major Foxton was to use this hook which had several Swiss Army knife-style attachments as his own trademark.

After continuing to serve in the Balkans for several years after hostilities ended, Major Foxton took one last assignment, this time in Afghanistan reprising his humanitarian assignments.

He was eventually persuaded to leave this war zone only after intelligence reports signalled that he had become a marked man, and was therefore a magnet to attacks which would inevitably involve his civilian charges.

A former intelligence officer with the British army in Ireland during the Troubles he knew exactly what this meant and after an active military career approaching half a century he reluctantly and finally hit civvy street.

His extraordinary life in three armies would beyond the military sphere have gone unnoticed had not Major Foxton become irrevocably bound up with the Madoff scandal in which he lost his life savings and which caused him in consequence to take his own life and which conferred on him a kind of posthumous celebrity.

He had crawled through minefields, disarmed unexploded ordnance, yet ultimately he was done in by the people he trusted, his investment advisers – civilians.

Now there are indications that this soldier of fortune, humanitarian and scholar sprang from New Zealand origins.

It is thought that his father was a New Zealand serviceman who had married in Britain during the war - and stayed there . Major Foxton, the son, was born in 1943.

Meanwhile Major Bill Foxton’s humanitarian operations during the last Balkan wars are considered to have been extensive.

This was particularly so in his ability to deploy regional languages as NATO rapidly took over operations from United Nations.

Asked on one occasion how he was able to assimilate so many diverse languages he said simply that it was a matter of listening to them.

Meanwhile, there is a strong indication that as the Balkans once again became the tinderbox of history there was at this pivot a character who could have walked out of any adventure book and who had a New Zealand connection to boot.