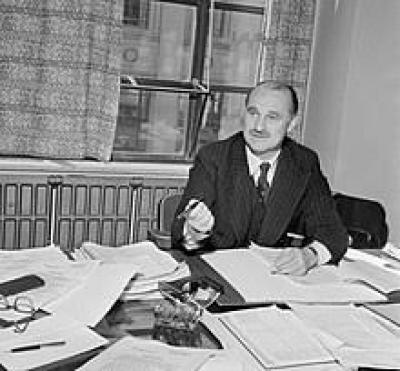 When Keith Ovenden married Helen Sutch only daughter of Bill and Shirley he can be forgiven if he believed that in this alliance he had also become heir to a cultural hegemony.

There were though early indications that Keith’s induction chez Sutch would be anything but smooth.

Indeed Keith Ovenden newly arrived in New Zealand and supping with his new in-laws found the experience difficult to the point of indigestion.

This froideur could not be alleviated by the ingestion of a chardonnay or pinot, local of course. A moral absolutist, Bill Sutch was an aggressive teetotaller.

On one of his rigorous hikes in the Makara region of the Wellington coast one of the Sutch companions in the freezing weather pulled out a hip flask of whisky, took a swig, and received a dour dressing down from Sutch on the evils of liquor.

A well set up cove, urbane, the young Ovenden wondered about the cause of this dinner dyspepsia, unrelieved as it must have been by the emollient of any booze.

The reason for the tension as anyone who knew the Sutch menage at this time understood was that Keith was too urbane, too smooth.

Wanted on this familial doctrinal voyage was a firebrand son-in-law. Someone with an audacious disregard for the niceties….A preacher who could pack the Sutch intellectual church.

By the time Keith had digested this there came an event that defined the family forever.

At 2040 hours on September 26 1974 on a bleak Wellington evening and outside a brick public convenience elements of the Security Intelligence Service apprehended William Ball Sutch whose mystical writ across economics, the arts, and geopolitics until this very moment was unquestioned

Bill Sutch must have known that CAZAB as Five Eyes was then known was in the language of those days still “tearing the house down” to expose the high placed New Zealand public servants deemed to be assisting the USSR since the 1930s. Yet he all but offered himself up in the Soviet hand-over bust that night in Wellington.

What was he passing over? Probably the New Zealand meat schedule which gave the Soviets a position on their pricing for their own global meat procurement. The Soviet food shortage had in turn been created by Moscow’s doctrinal meddling in agriculture.

Sutch as the long term and defining supremo of trade during his tour as head of the department of industries and commerce might reasonably have retained access to this extremely useful early-warning data. After all, Bill’s reputation as an economist was founded on centralised pricing.

The subsequent trial in which Bill Sutch was acquitted made him the Dreyfus of the South Seas. Arguments see-saw back and forth and time has not diminished the debate.

Dr Sutch, as he liked to be known, was a mystery within a mystery, a one-man Russian doll, a series of contradictions and irreconciliable differences.

Why do some people flourish in large-scale institutional life while others seemingly equally gifted wither on the vine?

Bill personifies the answer to this riddle. He was all things to all men. You wanted the running on globalism? You went to Bill. Nationalism? Bill was your man. The books were there to prove it, the ones with ringing titles such as Quest for Security, Responsible Society, Takeover New Zealand.

A characteristic of any examination at all of the duo is that the author/commentators seek to focus on Shirley.

Shirley, a human rights lawyer, is a recognisable figure in the causes of the last century. It is in Bill that we find the contradictory persona that will ensure that the Sutch syndrome will continue to be mined for years to come.

For example it was Shirley who looked as if she was from an everyday provenance and Bill with his David Niven-meets Claude Rains aspect who looked posh. In fact Shirley was the daughter of a judge. Bill was the son of a carpenter and a seamstress.

Bill thought of himself as an architect, hence his vaunted role as a nation builder. He saw how real-life architects needed to get alongside the cultural elites, the people who ran the show, and thus he immersed himself in the arts. Nobody likes a dull boy, however adept at administration. He was chairman of the Arts Council at the time of his arrest.

When a year later, at a mere 68, Bill Sutch died the ensuing festschrift, collection of tributes, testified to Bill’s quasi-mystical intellectual status with the most boffo of all the titles in the Sutch constellation – Spirit of the Age, a tag which has about it still now an eerie accuracy.

There are two recent books on the Sutch syndrome. First off the rank was Sarah Gaitanos with Shirley Smith: An Examined Life (Victoria University Press.) Now we have Keith Ovenden with Bill & Shirley: A Memoir (Massey University Press.)

The portrait of a marriage could have been entitled The Long Shadow because this is where Keith has dwelled. He has become frozen in time as the eternal son in law. One recalls his crisp worldly contributions to Column Comment, the local tv version of What The Papers Say. He co-founded The Week a disappointingly short-lived ideas and opinion newspaper. Academia has beckoned over the ensuing years. He was made ONZM.

Oxford, the university, looms over the Sutch saga. Shirley went there. So did daughter Helen and of course Keith was there also. One recalls the words at the end of his long Oxford career of the late Master of Balliol, Benjamin Jowett.

“But was there any fun?”