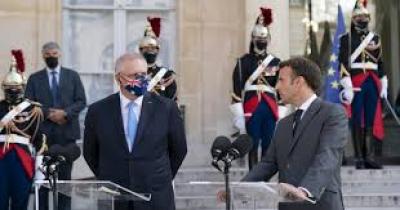 France really did learn at the same time as everyone else that its flagship technology deal to build Australia’s submarines was cancelled. The reason was that France’s channels kept telling Paris that the Australian government would not dare to confront its electorate with anything nuclear in any shape or form.

The more Paris interrogated its own channels the stronger emerged this anti nuclear theme and with it the belief in the determination of Scott Morrison government to stick doggedly with the diesel submarines on order.

These channels included France’s own embassies and consulates and also its lobbyists which had the single purpose of monitoring the progress of the submarine construction contract.

Ex Australian federal prime ministers from opposing parties insisted that the deal would continue uninterrupted if only because of the electoral hazards of inviting anything nuclear into Australia.

The linkage between green-climatism-nuclear is stronger in Australia than anywhere else. One development especially convinced France and its informants that this linkage was now about to be massively and unexpectedly reinforced.

News Corporation had been on the sidelines of this three-sided contention if not actually openly sceptical. It was now about to plunge in on the side of the climatists and thus the anti-nuclears.

As indicators of this about-face began to seep out from places such as the chain’s advertising sales operations, so the belief became even more cemented in that France’s diesel submarines were safe simply because they were not nuclear.

After all News Corporation’s success everywhere was built upon the ability to position its media to take advantage of the public mood by accurately calibrating it.

Australia’s susceptibility to alarms about nuclear technology’s threat to existence is due in large part to it being viewed after World War 2 as a sanctuary from the Cold War with its threat of annihilation.

Its anti-nuclear protest movement kept pace with that of Britain which is where many of this era immigrant wave had come from.

This activism has been constantly fuelled and refreshed ever since by Australia’s presence as one of the world’s big three uranium suppliers.

Though the rest of the western world’s defence establishments found the equipping of France’s nuclear submarines with diesel engines rather odd, this was not a widespread impression within Australia itself.

Australia’s quirky tendency to bypass off the shelf standardised defence options in favour of acquiring a unique production run with its own specifications is not unfamiliar.

France’s channels both official and unofficial backed this by telling Paris that their subs were truly safe and that the green-climate-anti nuclear movement, a movement about to be so massively reinforced by the intervention of News Corporation, would keep them even safer.

This was because any nuclear alternative would be interpreted as the thin end of the wedge, a point of entry, for nuclear power stations.

This theory again rang true in Paris long ultra-sensitive to the eagerness of activists in Australasia to display outrage at the mere scent of anything nuclear.

All these informed hunches seemed to outweigh the gathering shifts affecting the zones and conditions in which the submarines would eventually one day operate.

Such as China’s rapid escalation from a perceived benign autocracy which had rescued “a quarter of the world’s population from poverty” into a most visible threat to global stability.

Then came the Kabul evacuation the images of which demanded a global-strength diversion which now took the form of AUKUS.

At first there was a belief that France all along had known the game was up and was recalling ambassadors and sounding its “fury” to extract from its Australian ex customer still greater contract termination penalties.

And yet. And yet. France paradoxically has emerged from the Cancellation as a good and trusting ally.

There were no tripartite intercepts along the Canberra-Washington-London communications triangle. Hotels suites in Cornwall were unbugged. No sources obviously existed at any level at all within the sprawling Australian side of the project …..

More in this category: « Maori Words Force Feeding Hid Lax Vax Uptake Graziers for the Chop as Glasgow Cop goes Vegan »
back to top
May 01, 2018