Graziers for the Chop as Glasgow Cop goes Vegan 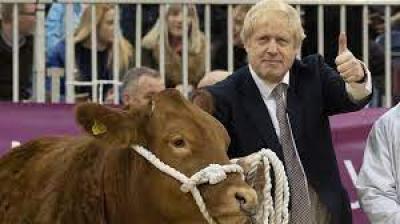 Pastoral farmers have emerged as the easiest targets for the Glasgow climatists. British prime minister Boris Johnson has proclaimed that Britain will eat “alternative proteins,” instead of red meat.

There are strong indications that Australasian pastoralists are being softened up with the pre-Glasgow plugging of cattle and sheep as villains behind climate warming.

Worse still, Mr Johnson’s vendetta against pastoral farmers targets dairy products as well as meat. Cheese is included on his list of global warming endangered products scheduled to be replaced by protein “substitutes.”

Censored from media channels in ruminant raising countries has been the preliminary skirmishing surrounding the Glasgow menus with activists seeking to ensure that the delegates have plant food diets only at the meet.

Similarly censored in these agrarian supplying nations is the new vehement straight-to-camera determination of Mr Johnson to follow the polls which show him that climate ideology now controls the votes of urban non-productive knowledge workers.

In concert with the meat and cheese purge the City has now formally identified (non pastoral) green industries as the subsidised replacement for the now mature information technology boom of the last era.

A dedicated steak and chips and cheese dietary adherent until just a few weeks ago Mr Johnson’s whoopy-cushion private school buffoonery is being brought to bear on his now extremist climatism.

His new role as arbiter of public taste as enforcer of the national diet coincides with his restoration of the pre-EU Commonwealth trade preference on meat and dairy products.

Giving with one hand, taking with the other and with an even greater accompanying fanfare he simultaneously proclaimed these very same meat and dairy products banned from the approved menu for Britons.

Glasgow showcase attendee president Joe Biden’s polls have been telling him much the same thing as Mr Johnson’s, but for rather longer.

Namely that climate warming is the over-arching cause, the cause of causes, of the educated privileged, and that events such as the Glasgow one represent the key to sealing in this vote by raising the temperature of the “clock is ticking” moral panic alarm.

Unspoken in the Glasgow event is the way in which its promoter United Nations is using it to brush under the carpet the pandemic which its World Health Organisation division failed to identify and detect until it was too late. This is the reason that it insists that climate is always described as the “real” crisis.

Pastoralists accommodate and temporise with the climate doctrine in all its self-scourging forms. This productive sector cannot bring itself to realise that the movement is as much about capturing votes as it is about capturing carbon dioxide.

Prince Charles and his ducal sons both becoming more excitable by the day have bestowed the royal seal of approval on the Glasgow meet anointing it with a ruling class mantra as the “best and last chance” saloon in which to redeem the planet.

Her Majesty has kept her distance from the hysteria. The UK media deliberately and incorrectly interpreted her “irritation” comment as one centred on climate warming itself.

It in fact reflected the Queen’s impatience with heads of state declining to commit themselves one way or the other to attending the conference and in doing so creating for her a protocol and organisational problem of considerable magnitude.

New Zealand’s barely arithmetically calculable warming contribution is assessed as a coefficient of its immense number of gas emitting ruminants (grazing animals) in proportion to the now fabled and diminutive “team of five million” number of humans doing the same thing.

It is this supposed total gas-per-person assessment that empowers the cabinet-sized government delegation from New Zealand to the Glasgow summit with its now suddenly and unexpectedly accelerated anti-pastoral agenda.