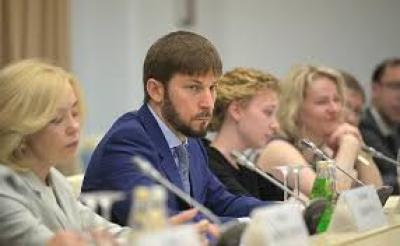 When John Kerry on learning of the Russian invasion of Ukraine announced that he hoped it would not interfere with his global climate change plans many were aghast. “I hope President Putin will help us to stay on track with respect to what we need to do for the climate.”

There are some signs that the former Democratic presidential nominee’s statement needs to be examined even more closely than it already has been.

The reason is that president Biden’s climate envoy may have believed that he was on one side of a covenant that overruled military intervention in the deeper interest of controlling man made distortions to the climate.

John Kerry is also a former United States secretary of state and his belief that he was party to any covenant, pact, might reasonably rest on his own belief in his Russian counterpart.

Ruslan Edelgeriev (pictured above) is a central figure in this particular drama and who has been ignored in the West which is all the more surprising bearing in mind his obvious status.

His role from the start was designed to mirror the West’s well intentioned attitudes to climate. His candid attitude dovetailed into that of the West’s climate advocates, notably those of Kerry himself. Ruslan Edelgeriev had a one-on-one with John Kerry at Glasgow.

“We agreed to continue cooperation after Glasgow, including on methane and the satellite monitoring of greenhouse emissions," the Russian climate envoy told Tass.

John Kerry told Tass that the meeting with his Russian counterpart was “excellent.”

Ruslan Edelgeriev has a solid and diverse background in Chechen academia garnering degrees in law, and farm products processing technology.

Prior to this he did his conscript service in the Russian military followed by ten years in the security service, the FSB. Now his career took off. He became the Chechen deputy minister of agriculture. Then the big jump to deputy prime minister of the Chechen Republic followed by four years as premier.

In 2018 he took over the climate envoy job, and thus became cemented in as a member of president Putin’s innermost circle.

This was the man that president Putin had in waiting just to meet the John Kerry type that he knew would emerge as the standard bearer for the Democrat flagship binding belief, the climate one.

Indeed, John Kerry’s Roman Catholicism would have blended with his Russian counterpart’s role as a family man complete with six children.

The duo had at least two face-to-face meetings. John Kerry also had a phone call with his counterpart’s boss, president Putin himself. An activist since the 1960s and now fixated on climate John Kerry could not have refrained from rhapsodising about the great future that lay before Russia and the US in shared climate ethics.

A theme in this would have been in the US side pointing out to the Russians the degree to which they were even on track to being the beneficiary of global warming as their vast Arctic territories unfroze and opened up to agriculture, along with the ports needed to ship the cornucopia to a needy world.

John Kerry’s mind we may assume had become cleansed of the awful occasion when as US Foreign Secretary he stood by while Russia not waiting for the Arctic to heat up simply grabbed instead the Crimea and its warm water ports.

The Atlantic alliance consistently gave the impression of being untroubled by the gathering indications that Russia intended to reabsorb the remaining Ukraine and by any means;

The lead up period was characterised notably in the United States and Great Britain by an ever increasing revivalist vilification and condemnation of oil and gas.

This transatlantic chorus increased in crescendo as the indications of the Ukraine invasion grew more obvious. The possibility must be considered that among the choir masters there was a belief that the problem had been taken care of.

Was this a belief that in the transcending common and higher interest of climate cooperation there had been concluded a non-aggression pact? John Kerry’s reaction to the invasion in which he trusted that president Putin would keep climate “on track” reinforces this sense of priority of a fixed if undisclosed objective amid the turbulence.

Electorally in the United States climate consistently emerges as the common preoccupation of the coastal elites. This is why the White House postures that the surge in energy prices due to the war in Europe is actually beneficial. Why? Because it compels the introduction of new energy alternatives.

Neither is this confined to the United States. The outcome of Australia’s pending general election shows signs of being decided on the same doctrine and by the same type of people.

The Atlantic alliance remained consistently blind to the nuances of this war notably for example that the completion of the Beijing Olympics inaugurated the start of it. A reluctance to factor in Ruslan Edelgeriev is another example.

More in this category: « Refinery Closes as Tyranny versus Dogma Choice Looms for Government CCP Guadalcanal Beach Head Threat to AUKUS »
back to top
Jun 20, 2018