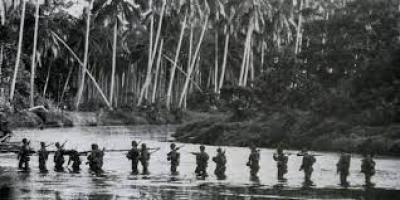 Atomic submarines treaty will be prey to close-in China eavesdropping

The Ukraine geopolitical counter weight gave the CCP the opportunity to cause it to be known that China was reinforcing its already troubling presence in Oceania with a base in the Solomon Islands only recently wrested away from an alignment with Taiwan.

The installations in the Solomon Islands will be ready to monitor Australia’s pending fleet of atomic submarines constructed and deployed under the AUKUS alliance and which will represent the allied-controlled major strike force in the southern hemisphere.

Guadalcanal (pictured) the main island, was a critical focus of the defence of Australia during World War 2 and is often considered the decisive battle in the Pacific theatre.

The CCP’s pressing strategy remains to shift attention from the Indo Pacific region and back where the CCP wants it which is in Nato’s backyard in Europe.

The Beijing Olympics provided the ceremonial cover to crystallize this. The war would be over before Nato had even had time to convene the meetings to implements sanctions.

Beijing would anyway underwrite the Russia exports simply by agreeing to take the output should anything go wrong with this scheme.

Even if the war dragged on for months rather than weeks, the United States and German reliance on hydrocarbons from Russia would continue.

The Eastern bloc always understood the way in which governments in the United States and Europe put tactical electoral considerations ahead of defence strategy.

In less than a year the United States had converted itself from an energy exporting nation into a major importing one. An unanswered conundrum is why president Putin abruptly curtailed this allied compounding reliance on Russian hydrocarbons by invading Ukraine.

Inspired leaks reveal that Washington’s belief in its shared common purpose view of the CCP was so enduring and deep set that it approached Beijing to be peacemaker, honest broker over Ukraine.

Seemingly Beijing went along with this asking typically in all such dealings of this nature for more and still more data and giving as much weight to what was undisclosed as was disclosed. One piece of data passed on would have been the strong conviction within the United States military to the effect that the war would indeed be a short one.

When the vaunted and much publicised and increasingly soft-looking Nato sanctions eventually cut in the CCP will take over as the dominant customer for Russia’s hydrocarbons and will duly set the price to suit itself.

Had he remained rules based and within his own constituted frontier president Putin could have at least tripled the value to Russia of this Nato dependency. He had a clear market run to the next United States presidential election at the very least.

CCP encouragement stands out as an obvious reason. The CCP knew that the IGOs along with many NGOs were determined to keep the United States and the United Kingdom as the new avatars of political aversion to hydrocarbons.

They were prize additions to the existing captive market held in line by these same IGOs and NGOs, already featuring such energy dependent jewels as Germany and Italy.

The United States in its new national security self-eroding way had already introduced and thus supercharged for Russia’s immense benefit reverse elasticity for hydrocarbons. Demand increased and so did the price paid to Russia.

The more hydrocarbon prices rose so did demand. The reason demand and thus price consistently and in harness rose was because of the artificial shortage created by the White House

The CCP emerges in one of its favoured win-win positions. When the allied sanctions eventually cut in it becomes the obvious disposal market for Russian hydrocarbons.

If the allied politically-driven campaign into electrical vehicles accelerates then China will similarly become the disposal market for the Russian primary commodities required for these also. Nickel is but one obvious example.

President Putin it is said blames the United States for all and everything that goes wrong. So why did he deliberately ignore Napoleon’s dictum about the folly of interrupting an enemy while he is making a mistake?

In this case the mistake was the United States deliberately and even painstakingly abandoning its central strategy of energy self-sufficiency and in doing so putting itself in the hands of the very dictatorships it is pledged to defy.

In the resulting commotion in Europe China takes advantage of the diversion and digs itself deeper into the Indo Pacific.

More in this category: « Tacit Pact is Ukraine Complacency Possible Cause Australia Federal Election looks Weather Dependent »
back to top
May 01, 2018