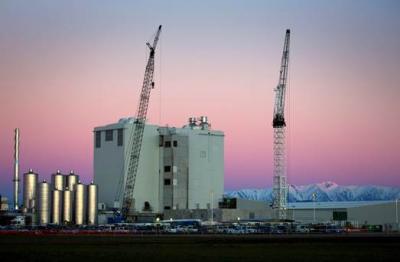 Fonterra’s new cream cheese plant in Canterbury has started production and is set to manufacture up to 24,000 metric tonnes of cream cheese annually, bound for China.

China’s changing demographics have driven a surge in popularity for Western foods. The 20kg blocks of cream cheese from Darfield will meet growing demand for bakery goods, like cheese cakes and cheese tarts.Susan Cassidy, General Manager Marketing, Global Foodservice, Fonterra, says growth in China’s middle class, rapid urbanisation and changing consumer tastes have contributed to explosive growth in the number of consumers wanting New Zealand dairy.“People in China want natural dairy products they can trust in their baked goods. That’s great for Fonterra and New Zealand,” she says.Robert Spurway, Chief Operating Officer, Global Operations, Fonterra, says the new plant is an important part of the Co-op’s strategy to keep up the momentum in producing more value-added products for its Consumer and Foodservice business.“Today, one in four litres of milk from New Zealand is sold to China – that’s the equivalent of 3.4 billion litres a year. Our focus is on creating the highest return from each of those litres.“The new plant will enable us to convert more milk to high value cream cheese, which is in popular demand. We’re really proud of our technology which alters the firmness and consistency of cream cheese according to customer preference. It’s a technology first and a huge competitive advantage,” Spurway says.Darfield’s Acting Site Operations Manager Shane Taylor says the 30 new employees hired to operate the cream cheese plant have been looking forward to the site opening for the last six months.“Most of the team have learnt everything from scratch. They’ve gone from classroom to practice to real life commissioning of the site. If the plant was a ship, they would have been the crew preparing for its maiden voyage and a long life on the ocean,” Taylor added.

Rod Oram: Should Fonterra be broken up?