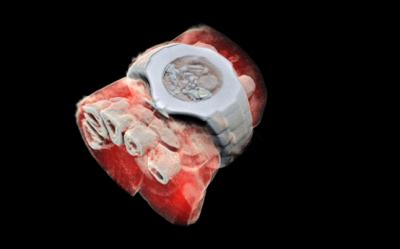 Invented in Christchurch, the MARS spectral x-ray scanner will revolutionise medical imaging globally, and the diagnosis and treatment of diseases such as cancer and heart disease, because it provides far greater detail of the body’s chemical components.

In this upcoming UC Connect public lecture – MARS: X-ray colour for medicine – you can find out more about the MARS spectral x-ray scanner from one of the Christchurch scientists who invented it, Professor Anthony Butler.

The first human has been scanned and soon Christchurch orthopaedic and rheumatology patients will be scanned by the revolutionary new 3D colour medical scanner in a world-first clinical trial.

Professor Phil Butler is a physicist at the University of Canterbury. His son Professor Anthony Butler is a radiologist and a professor at both the Universities of Canterbury and Otago and will be hosting a UC Connect public lecture on the invention. The Professors Butler adapted technology used by the European Organization for Nuclear Research (CERN) in the hunt for the ‘God particle’ into the medical scanner.

The MARS CT scanner produces images with significantly improved diagnostic information. It measures the x-ray spectrum to produce colour images instead of black-and-white ones, and shows different components of body parts such as fat, water, calcium, and disease markers.

Professor Phil Butler was the first person to be scanned. A clinical trial involving orthopaedic and rheumatology patients from Christchurch will allow the MARS team to compare the images produced by their scanner with the technology currently used in New Zealand hospitals.

Professor Anthony Butler says after a decade in development it is exciting to have reached a point where it’s clear the technology could be used for routine patient care.

“The goal of the MARS project is to advance x-ray imaging so that it provides researchers and clinicians with a tool to measure biochemical and physiological processes in the body. This is significant advancement because currently (in medicine) x-rays are only used to provide anatomical information. For example, x-rays give the shape of bones and in the case of CT (computed tomography) the shape of organs. Using x-rays to provide biochemical and physiological processes will enable researchers and clinicians to better diagnose and treat a wide range of diseases.”

The technology works by measuring the colour (aka energy) of x-rays after they have passed through the body. The x-ray colour provides information about the chemical and atomic constituents of the tissues. In order to measure the x-ray colour New Zealand researchers worked with CERN and others to adapt from the Large Hadron Collider. The New Zealand team of more than 50 includes researchers from the fields of physics, engineering, computing, maths, radiology, cardiology, biochemistry, oncology, and orthopaedics.

Professor Anthony Butler is a radiologist with an interest in developing new imaging technologies. In 2007 he was one of the founders of MARS Bioimaging Ltd, a company formed to commercialise spectral imaging technology. He remains on the board and is the Chief Medical Officer.

Anthony has more than 150 scientific publications. He has won more than 10 awards for his research including awards from the Royal Society of NZ and the Royal Australian College of Radiologists. He is the lead investigator on over $12 million of NZ government research grants, and co-investigator on more than $30m of other grants.

More in this category: « NZ start-up set to disrupt $40b industry New study links common herbicides and antibiotic resistance »
back to top
May 01, 2018

New Use your mouth campaign encourages Kiwi workers to speak up