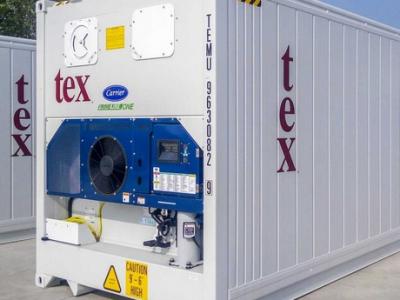 Underscoring the significance of the order, the announcement was made this week, just before Intermodal Europe 2018, the world-leading exhibition and conference for companies associated with the container and intermodal industries. Carrier Transicold is a part of UTC Climate, Controls & Security, a unit of United Technologies Corp.

“As a major supplier of refrigerated containers to shipping lines around the world, we have one of the industry’s youngest and fastest-growing reefer fleets,” said John Simmons, vice president, Refrigerated Containers, Textainer. “The PrimeLINE ONE refrigerated container further advances our commitment to provide our customers with equipment that is built to the highest specifications using the latest technology.”

The PrimeLINE ONE refrigerated container was developed through a joint initiative of Carrier Transicold and Singamas to provide a solution that takes advantage of Carrier’s PrimeLINE® container refrigeration system, which is assembled on-site into a custom-configured container in a streamlined manufacturing process. According to the company, it provides an alternative to the traditional approach of bolting a complete refrigeration system to the front end of an insulated shipping container. The 40-foot, high-cube PrimeLINE ONE containers are assembled at a new Carrier Transicold facility located next to Singamas’ refrigerated container plant in Qingdao, China.

More in this category: « KiwiRail begins geo-tech studies for Northport spur line
back to top
May 17, 2018