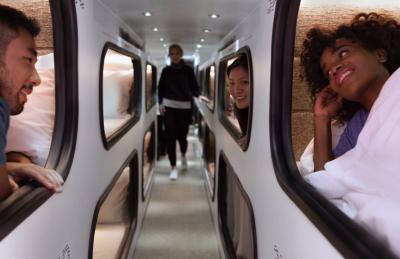 If you were in either San Francisco or LA, and wanted to arrive in the other city first thing in the morning, you'd have to catch quite an early flight. It could potentially leave you feeling groggy for the rest of the day. Well, Cabin offers a less costly and potentially more restful alternative. Its sleeping-cabin-equipped buses run between the two cities, leaving from one at 11pm and arriving at the other by 7am the next day.

The service began life as the SleepBus pilot project, which was initiated by entrepreneur Tom Currier. Following its success, Cabin was born.

Each of the two double-decker buses has two levels of pod-like cabins (for a total of 24), each one of which sleeps a single passenger. Besides sheets and a pillow, those cabins also feature privacy curtains, air conditioning, a window, a reading light, a power outlet and complimentary earplugs – although the walls are claimed to be soundproof.

There's additionally a lounge for people who wish to sit up and socialize, along with a bathroom equipped with a toilet and sink, for freshening up in the morning. And hey, there's also free Wi-Fi, water, coffee and tea, the latter three served by onboard attendants.

Tickets can be booked online, with one-way fares starting at US$115. Passengers are permitted two pieces of luggage.

The service launched on June 28th, with the first run scheduled to take place this Friday. Additional routes are planned for the future.

More in this category: « KiwiRail wins Australasian award for freight excellence Hyperloop One has first successful test »
back to top
Apr 02, 2018