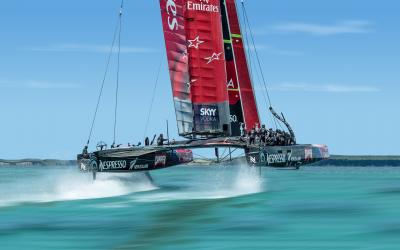 Emirates’ sponsorship of America’s Cup winners Team New Zealand was cited as part of a case for participation in a Dubai expo that will cost taxpayers $53 million, documents show.

Other factors cited for giving “serious consideration” to committing to Expo 2020 included growing defence and security links with the United Arab Emirates — which Dubai is part of — and the economic value of Emirates’ daily flights to New Zealand.

An October 2016 scoping update from the Ministry of Foreign Affairs and Trade (Mfat) said the UAE was a political partner in the region, not only from a trade and economic perspective but increasingly in defence and security.

“The UAE has a strong commitment to New Zealand, evidenced by its increased engagement, including development partnerships in the Pacific on renewable energy, investment (e.g. Precinct Properties and significant progress toward a new food security fund), and spon- sorship of Emirates Team New Zealand since 2004,” states the report, released to the Herald with other documents under the Official Information Act.

The Emirates Group is owned by the Dubai Government’s investment corporation.

The National Government put $5m into the recent Team NZ campaign. National criticised the thenLabour Government for agreeing in 2007 to put $38m into Team NZ.

The documents outline the incredible scale of the Dubai expo, which will run from October 2020 to April 2021.

The expo will be attended by about 25 million visitors, with up to 75 per cent expected from Germany, Britain, Russia, China, India and Africa.

The UAE will spend close to $12 billion on supporting infrastructure, including the world’s largest airport, 500 new hotels and five new amusement parks.

Act leader David Seymour has been critical of the expo spending, and said the reasons given to support it would make Robert Muldoon “cackle from the grave”.

“His ghost lives on with these silly ideas that all the New Zealand economy really needs is a few very clever politicians to spend our money in the right places,” Seymour said, adding that extreme wariness was needed when considering any cost-benefit analysis.

“You can prove anything if only you let the ever-widening circles of flow-on effects go wide enough.”

Foreign Minister Gerry Brownlee said the reference to the Team NZ sponsorship and other commercial and regional links were given as examples of the breadth and strength of the NZ-UAE relationship, and how the UAE has sought to strengthen those ties.

“Participation at Expo 2020 presents a unique opportunity to showcase New Zealand’s innovative products and services . . . our participation at Shanghai in 2010 was a huge success.”

The documents released by Mfat officials also said accepting the invitation would aid efforts to secure a free trade agreement with the Gulf Co-operation Council (GCC).

Progress on getting the deal over the line has stalled after fallout between Qatar and other council members, but Brownlee said the Government’s focus on concluding an FTA hadn’t changed.

A Treasury panel pushed for a “small size” option to go to Cabinet, similar to New Zealand’s presence in Aichi in 2005 which cost $8m. The “modest” option of $53.24m was selected because it would enable hosting of visitors. New Zealand budgeted $30m for Shanghai.

Mfat officials noted the combined economic value to New Zealand of the five daily Emirates A380 flights is estimated to exceed $700m a year.

In an impact analysis, officials estimated being at the expo would mean a greater likelihood of more international flights coming to New Zealand, bringing forward the arrival of these flights from about 2025 to 2020.

Estimated benefits included an extra 1 per cent a year in inbound foreign investments from the GCC region and a boost to the number of international students and tourists from the region.

The analysis assumed not being at the expo would see the annual economic growth rate for foreign investment from the GCC drop from 4.95 per cent to 2.48 per cent for five years.