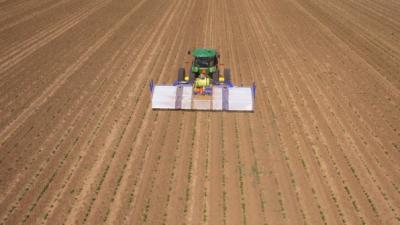 “You can imagine that growers see dollars and cents when they see a 95% reduction in herbicide spend–that clearly gets them interested.” [Photo: courtesy Deere & Company]

The acquisition of a computer vision startup speeds the company’s goal of helping farmers grow enough food for an exploding global population.

On a block in San Francisco’s SoMa district, near LinkedIn’s headquarters and dozens of startups, a 180-year-old company best-known for making tractors has a gleaming new Silicon Valley office. But inside, instead of building the latest app, John Deere is focused on how to use artificial intelligence to make farming equipment that can meet modern sustainability and food production challenges.

John Deere Labs, which opened its doors in the spring, made its first major deal on September 6. The company spent $305 million to acquire Blue River Technology, a startup with computer vision and machine learning technology that can identify weeds–making it possible to spray herbicides only where they’re needed. The technology reduces chemical use by about 95%, while also improving yield.

“What Blue River Technology allows us to do is move to the plant level, and start managing at that plant level.” [Photo: courtesy Deere & Company]It’s one step in John Deere’s embrace of “precision agriculture,” the use of technology to target crops and soil for optimum productivity and health. The manufacturer began incorporating aspects of precision agriculture more than two decades ago, building self-driving technology into tractors long before it started showing up in cars. But advances in AI mean that farm equipment can change more significantly now.

“What Blue River Technology allows us to do is move to the plant level, and start managing at that plant level,” says Alex Purdy, director of John Deere Labs. “That’s going to have transformative power in agriculture both in terms of yield but also in terms of cost for growers.”

More in this category: « Kiwi beef Japan's flavor of the month Alliance acquires business of Singapore’s GoldKiwi Asia »
back to top
Mar 27, 2018