Sea salt around the world is contaminated by plastic, studies show 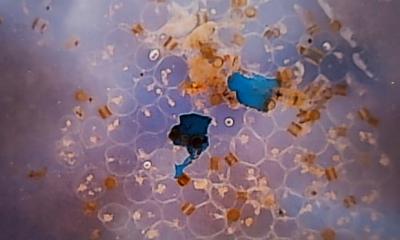 Two fragments of blue microplastic surrounded by diatom phytoplankton (seen under a microscope) after being collected from the sea in a fine mesh trawl net. Photograph: Alex Hofford/EPA

New studies find microplastics in salt from the US, Europe and China, adding to evidence that plastic pollution is pervasive in the environment

Sea salt around the world has been contaminated by plastic pollution, adding to experts’ fears that microplastics are becoming ubiquitous in the environment and finding their way into the food chain via the salt in our diets.

Following this week’s revelations in the Guardian about levels of plastic contamination in tap water, new studies have shown that tiny particles have been found in sea salt in the UK, France and Spain, as well as China and now the US.

“Not only are plastics pervasive in our society in terms of daily use, but they are pervasive in the environment,” said Sherri Mason, a professor at the State University of New York at Fredonia, who led the latest research into plastic contamination in salt. Plastics are “ubiquitous, in the air, water, the seafood we eat, the beer we drink, the salt we use – plastics are just everywhere”.

Continue here to read the full article and supporting material . . .

More in this category: « Rare bird sighting at our Maungaturoto site Soft plastics recycling scheme for Nelson »
back to top
Aug 09, 2018