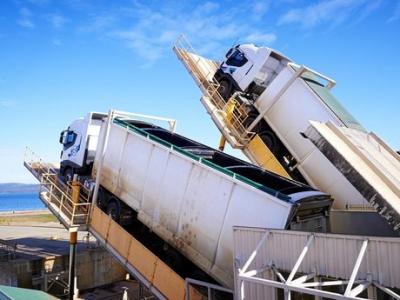 Trucks and trailers are hydraulically tipped for unloading chip for export, fast unloading and quick turnarounds.

The company runs a range of IVECO Stralis models for the job. The Stralis prime movers operate five days per week, averaging more than 400km per day, with the majority of the plantations they service located within a 130km radius of Albany.

Along with the WA-based fleet, C3 also operates several trucks from the city of Portland in south-western Victoria in the same application but configured as B-doubles.

C3 has invested in more than 20 Stralis trucks across several years, comprising of the earlier series AS-Ls and four new AS-L Series II models that have been added in recent months.

These were fitted with Cursor 13 engines producing 500 horsepower and the smooth-shifting EuroTronic II 16-speed AMT.

"We began using Stralis AS-L prime movers around six years ago. Some of these are still being used and now have over 800,000km showing,” Craig said.

"When it came time to grow the fleet in this application, we opted to continue using AS-Ls, purchasing four of the latest Series II models in March.

"This time we went for the higher engine output and worked with IVECO to select the best GCM.

"The AS-Ls allow us to work at our desired target of 90 tonnes, which helps productivity.

"The AS-Ls do quite an amazing job, they are a good all-round fit for the application. They're comfortable, quiet, they're easy to work with and are competitively priced.

"A lot of the roads the trucks travel on, especially in the plantations, as you could imagine are not very nice, the trucks can take a battering, but the IVECOs handle it well.

"The drivers are also happy with them, especially with their comfortable, quiet cabin.”

Platformication: The platform economy has arrived