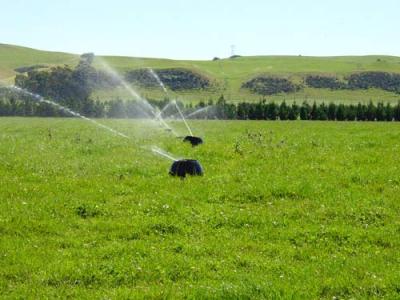 15 Nov 2017  -  IrrigationNZ says that the petition presented by Greenpeace at Parliament yesterday misrepresents how irrigation has been funded and used and ignores the wide range of benefits to New Zealand from irrigation, as well as the efforts being made to address environmental issues.

“Greenpeace has presented a petition seeking to stop government funding of irrigation schemes. The petition is misleading as the majority of money provided to irrigation schemes by Crown Irrigation Investments has been in the form of loans which have to be paid back with interest,” says Andrew Curtis IrrigationNZ Chief Executive.

Mr Curtis says the petition’s focus on irrigation being used by dairy farms does not fairly represent how irrigation is used in New Zealand. Over half of New Zealand’s irrigated land is not used for dairy farming but to grow crops, for sheep and pasture grazing, and for fruit, vegetable and wine production. Most dairy farms in New Zealand do not use irrigation.

Trials by the Foundation for Arable Research have found that arable farms with irrigation leached less nitrogen than the equivalent dryland farms. On irrigated farms nutrients can be targeted to provide reliable plant growth which is not limited by soil moisture. Enhanced plant growth allows more nutrients to be used by plants, reducing the risk of leaching. Irrigation also promotes consistent ground cover (either crops or pasture) through the summer growing season, which reduces the risk of wind erosion of soil and surface sediment runoff. Sediment is a significant contaminant in waterways.

Irrigation schemes can be designed to protect river health – for example water from the Opuha Dam is used to supplement river flows to keep the river flowing during drought years and is released to mimic ‘natural freshes’ that flush-out algal growth in the Opuha River.

“The recent report on domestic vegetable production by HortNZ highlights that New Zealand needs to focus on ensuring there is a secure food supply for the future. Irrigation helps us feed our growing population, keeps food more affordable and allows a wider variety of local food to be grown throughout the year,” Mr Curtis adds.

“Irrigation will become even more important in the future to help reduce food shortages or price spikes due to droughts occurring more often as a result of climate change.”

“Irrigation is vitally important to New Zealand’s economy and it contributed an estimated $5.4 billion to NZ’s GDP in 2016-17. For every 1,000 hectares of irrigation added, several New Zealand studies have found at least 50 new jobs are created. For high value horticulture, this increases to over 500 new jobs,” Mr Curtis says.

“New Zealand is a world leader in efficient, safe food production and irrigation plays an important role in this as well as in creating prosperous communities. Farmers and growers are now taking a wide range of actions on farms like fencing off waterways, riparian planting and developing farm environment plans which are already resulting in improvements to rivers,” says Mr Curtis.

(2) Information on the Opuha Dam is online

(4) For details of the economic contribution of irrigation to GDP, how irrigated land in New Zealand is used refer to IrrigationNZ’s website