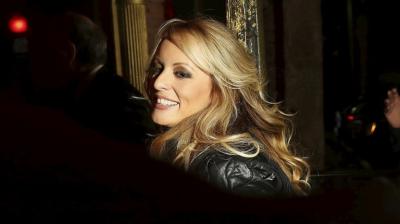 Mar 26, 2018 - New York - Stephanie Clifford, a pornographic film star known as Stormy Daniels, says she had an affair with Donald J. Trump. To many in the capital, she has become an unexpected force, but those who know her view the moment differently. An article by Matt Flegenheimer, Rebecca R. Ruiz and Katie Van Syckle.

It was the 10-year reunion for Scotlandville Magnet High School’s Class of 1997 in Baton Rouge, La., and a few alumni were being singled out for professional distinction. Stephanie Clifford needed no reintroduction. “Everybody already knew,” she said of her career in an interview. She worked the room of suits and gowns with a smile.

By now, the public knows both too much about Ms. Clifford, who goes by Stormy Daniels, and almost nothing at all.

She is the actress in pornographic films who is suing a sitting president, with whom she said she had a consensual affair, in order to be released from a nondisclosure agreement she reached with his lawyer just before the 2016 election. Over the past two months, she has guided the story of her alleged relationship with President Trump — and the $130,000 she was paid to keep silent — into a full-fledged scandal. If Ms. Clifford’s court case proceeds, Mr. Trump may have to testify in depositions, and her suit could provide evidence of campaign spending violations. She is scheduled to appear on “60 Minutes” on Sunday.

And if her name has seemed ubiquitous — repeated on cable television and in the White House briefing room, and plastered on signs outside nightclubs, where her appearance fees have multiplied — there is this to consider: Unlike most perceived presidential adversaries, about whom Mr. Trump is rarely shy, Ms. Clifford has not been the subject of a single tweet.